The next day we arranged for a day-long boat tour around the entire gulf. This was a welcomed, relaxing, non-life-threatening follow-up to Tarzan Day. 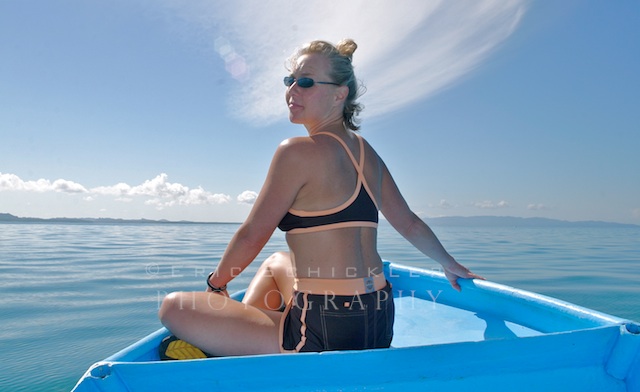 We cruised along the shoreline of the Piedras Blancas National Park, a recent addition to the country’s park system. Much of this reserve’s acreage has been recovered from private ownership and saved from years of logging activity. It features tropical cloud forests, rugged mountains and two large rivers. 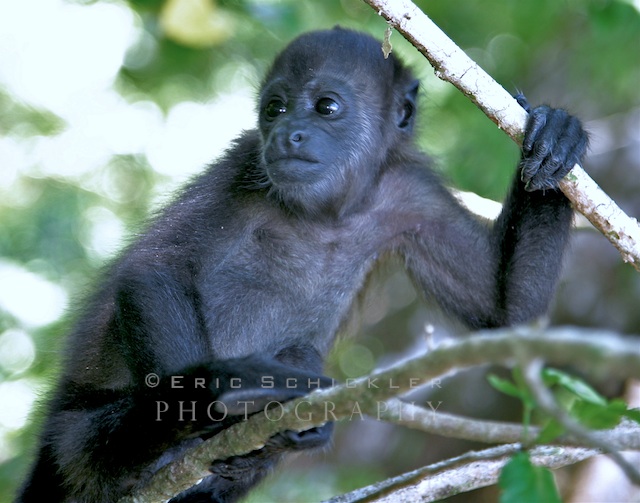 It is an important addition because it protects the remaining lowland tropical rainforest near the Golfo Dulce, habitat that harbors many undiscovered plant and animal species. Therefore, research activity is ongoing in the park.

Piedras Blancas National Park features pristine beaches, several types of rare trees, and all five species of cats — the jaguar, ocelot, puma, margay and jaguarundi. Don’t plan on spying one, though; they are very evasive and nocturnal. 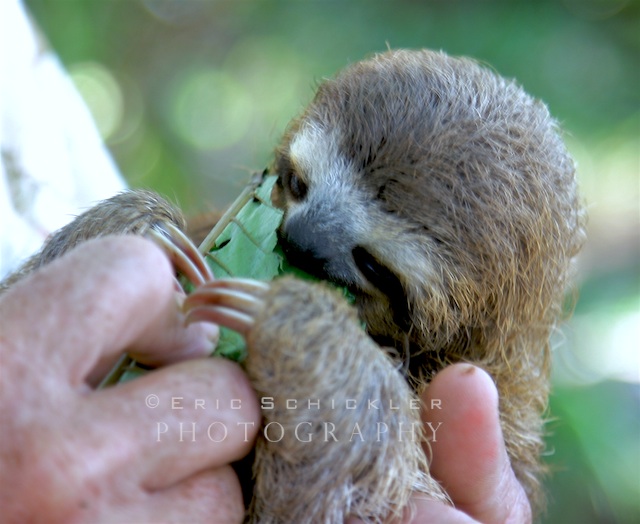 One notable tree species is called the Tiger Tree. It has many vertical crevices and creases, resembling tiger stripes. This very hard wood is popular for use in homes, buildings and furniture, especially as ornamental columns and posts. We noticed this amazing wood in several buildings while in Costa Rica.

Mangroves and estuaries along the gulf are full of wildlife. You can explore these ecosystems by small boats, canoes or kayaks and see river otters, crocodiles, monkeys, sloths, birds and waterfowl. Coral reefs also offer sensational snorkeling.

The park is considered one of the best bird watching areas in Costa Rica. But be sure to keep an eye on where you step — snakes and frogs are abundant as well. 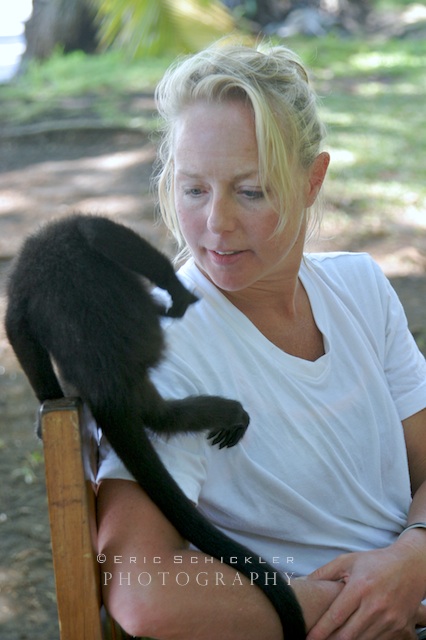 Our boat made just one stop on shore, at Rio Esquinas, home of the Osa Wildlife Sanctuary. It is here that orphaned and injured animals from the region are cared for until subsequent re-introduction to their habitats.

Because the animals are injured and temporarily in contact with their caregiving humans, some can be handled and petted by visitors.

Ana was allowed to play with a squirrel monkey, cuddle with a rare three-toed sloth and interact with an anteater. 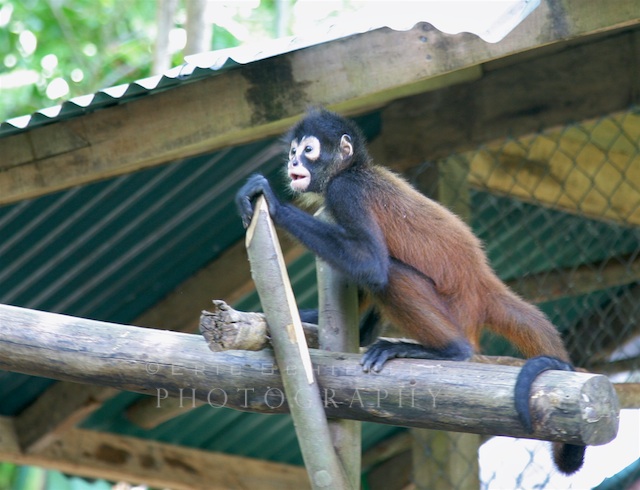 Back on the boat, we headed north to the far end of the gulf, where the waters are so calm, waveless, and clear you could see fish deep down below the surface. We snorkeled in the reefs briefly, then re-boarded to cruise slowly along the shore, looking for birds and marine life.

We spotted frigate birds high above, patrolling the waters for fish. Then a sea turtle just off the side of the boat. On the other side, a large manta ray floated just beneath the surface. Blue-footed boobies perched on floating tree limbs. 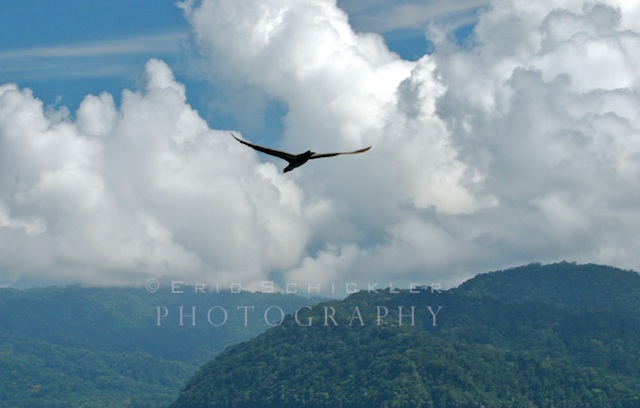 Flying fish rode shotgun alongside us as we gained speed to head back to the Iguana Lodge, some 20 miles down the gulf toward the Pacific.

Then the spinner dolphins joined in our high-speed race atop the sparkling waters—bouncing, weaving, jumping and, rightly so—spinning.

We stopped briefly so Ana could jump in the water and ride the boogie-board on a tow-rope behind the boat. Our guide billed this as “swimming with the dolphins.”

Sure enough, after just a few seconds the dolphins found her, swam alongside, dipped below her and tickled her toes. It was quite the aquatic dance. Ana wore a scuba facemask, allowing her to watch them weaving below the surface. 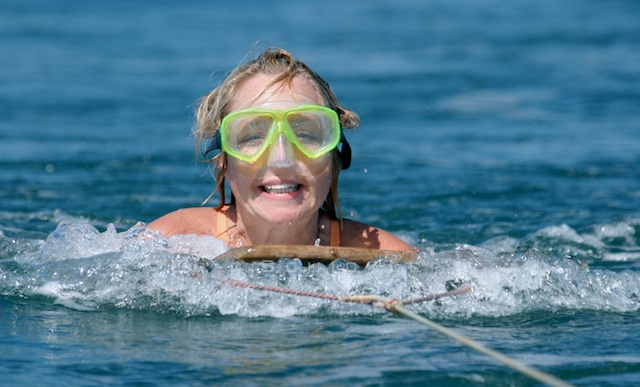 By late afternoon we were eager to escape the hot, bright sun. The cool, shady hideaway known as the Iguana Lodge awaited our return. We retreated from the beach, disappearing into our tropical refuge, tucked like a sinful secret in the jungle foliage.

As the sun set over the Pacific, the aroma of fresh grilled fish and burning candles infiltrated our senses. We reflected on our rather comprehensive tour around this scenic gulf, and now had a much better understanding of the space we were in. So remote, so pristine, so secluded, so peaceful and unspoiled. So ruled by its natural inhabitants. We felt very fortunate to have caught a passing glance at one moment in time. 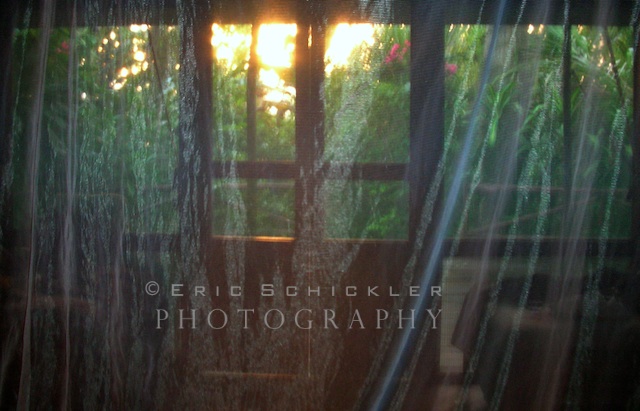 Once again, it was “Pura Vida.”

We fell asleep so peacefully that night to the sounds of gentle breezes and receding ocean waves, breathing an intoxicating mix of fragrances from the plants and flowers growing all around us outside our open-air casita.

Storms rumbled overnight. Rain and thunder and some lightning awakened us. Cool breezes belied our tropical locale. It was to be the last touch of temperate weather, before the late April heat and humidity crept in. We would soon learn what tropical weather was really like.

Morning brought a hazy humidity. The sun emerged to begin its work on the airborne moisture from last night’s storm. I smelled Costa Rican coffee and mango. 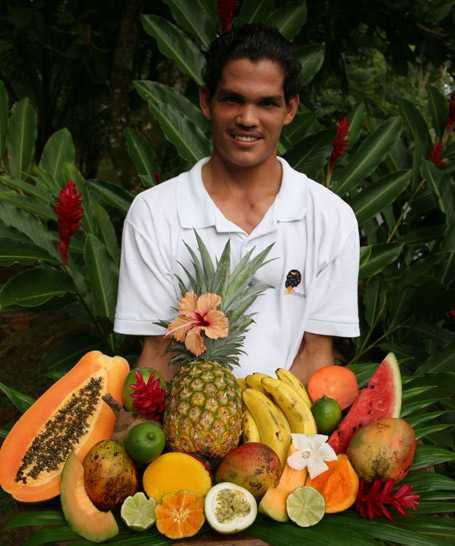 We enjoyed breakfast under stable skies, but learned that the rain was to resume for most of the day—not surprising as the rainy season was just two weeks away.

But the forecast was not great news, as were heading into the mountains today for some thrilling zip-line action along the tree canopy, near Miramar. Our guide and zip-line expert, Jacobo, told us that traveling to higher elevations was an advantage on a day like this.

It was fascinating how elevation affected precipitation behaviors in tropical climates. There were parallels to what we experience at varying elevations in Colorado. In April, and sometimes even in May, if it’s raining at 5,280 feet in Denver, it’s usually snowing in the foothills or mountains, elevations that are anywhere from 2,000 to 9,000 feet higher. It’s colder and often dryer the higher you go.

In southern Costa Rica, the lower elevations have tropical rain forests. But in the high mountains of this tropical zone, the biome you find is called the cloud forest. Because it is much cooler at these elevations, rain does not fall. Instead, the vegetation absorbs moisture directly from the clouds, which engulf the mountaintops.

As we maneuvered up the mountain on extremely muddy roads in our four-wheel-drive vehicle, the rain slowly dissipated, the air became cooler, and we soon found ourselves in the clouds! Alrighty then, let the zip-line fun begin! 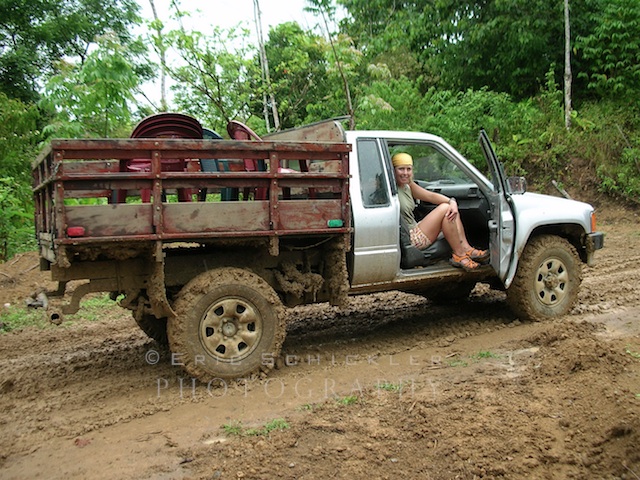 This was a new adventure for us both. It paralleled my tree-jump & rappel adventure in that, once again, I wanted to yodel like Tarzan.

Stopping in time to land properly on the tree platform was tricky. I nearly hit the tree on my first landing. Reminded me of the crash-test dummy thing in car tests. I learned really fast how to better use the brake by the second ride. We definitely felt like circus trapeze artists. One platform was 105 feet off the ground. 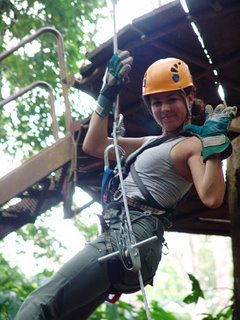 We zipped along on several different lines, totaling 2000 feet in length. It most certainly gave you the feeling of being a jungle animal or bird—dipping, rising and soaring at high speeds above and through the dense forest canopy. 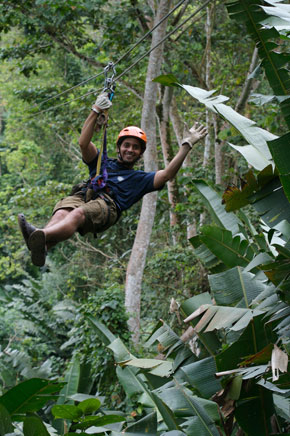 If that wasn’t enough, we spotted several howler monkeys, a friendly sloth and a colorful toucan in the trees nearby.

Thinking our day of adventure was done, we all loaded back onto the two trucks for the long ride back to Iguana Lodge. That was when the fun really began. Both trucks slipped and struggled on the muddy road, one obviously carrying a few too many passengers to make it up the one hill we encountered before beginning our ascent to the valley below.

We watched in shock as the top-heavy vehicle slid sideways, then listed to one side as it slipped into the drainage ditch along the road. It was close to rolling over!

The driver spun the tires, but to no avail. Now the vehicle started sliding slowly backwards–down the hill towards our vehicle! Our shock turned to alarm. With everyone in our vehicle preparing to jump from the truck before we got rammed, their driver brought the truck to a halt.

He exited the truck, stepping down into the slippery mud, and with a matter-of-fact nod to our driver, uttered one word: “Chains?” 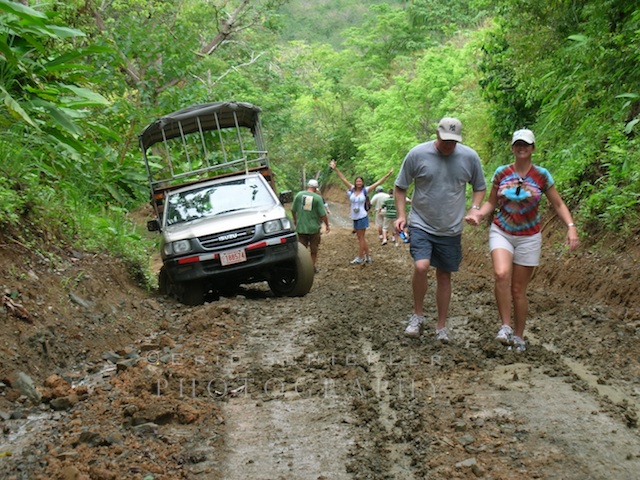 Strapping tire chains on two vehicles in sloppy mud didn’t look like fun, and I’m thankful they didn’t enlist our help. We were doing just fine enjoying cold beer on the back of the truck. In short order the chains were on and they did the trick. Our drivers got us out and safely down the mountain.

Will the Osa adventure ever cease?

“Did You Forget How Close You Are to the Equator?”

After a few very comfortable April days, with cooling storms at night, and some daytime cloud cover, we met Central American reality on the fourth day.

Now came clear skies, increasing heat and much higher humidity. Our active pace was about to slow down.

After 20 years in Colorado’s cool, dry climate, I had lost all memory of what muggy weather was. My only experience with humidity was in areas of the United States, and during a single trip to Cancun, Mexico, 18 years earlier.

This was a new experience. Afternoon humidity became almost unbearable on a few days on the Osa Peninsula. Even lying in a hammock in the shade was uncomfortable.

I started to think we should alter our daily schedules–get up earlier, stay up later, and save the middle part for siesta. A wise adjustment. Now I understood one of the reasons for “Tico time.”

Another way to beat the sultry afternoons was with a long cool shower. Our casita had a wonderful open-air bathroom & garden shower, featuring a five-foot privacy wall, over which was a clear view of the jungle. It had large built-in gardens with exotic plants and colorful growing flowers–succulents, bromeliads, orchids. 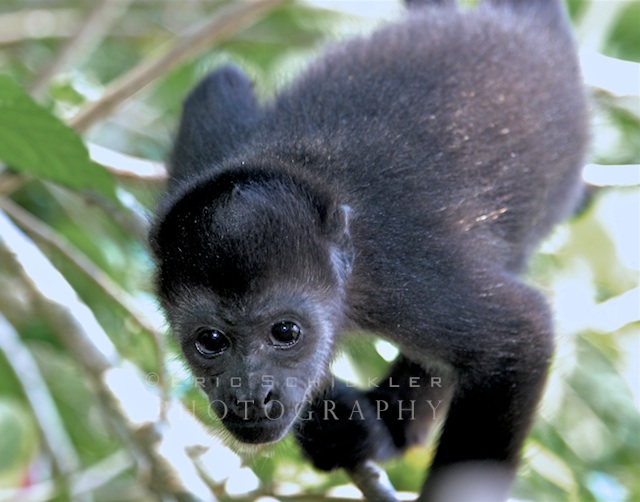 You could hear and see the birds, feel the breeze and smell the fragrant forest. I felt as if I were starring in a TV commercial for Herbal Essence shampoo. It was also not unusual to have a vibrant Halloween Crab, or bright green gecko hanging out in the shower looking for a free fresh-water rinse. I frankly didn’t want to leave the cool shower on those hot afternoons.

Nights were pleasant for sleeping, and our active days of adventure tired us so that we were dreaming about papayas by 10 p.m. Which was good, because around 4:30 a.m. the howler monkeys and macaws would start. 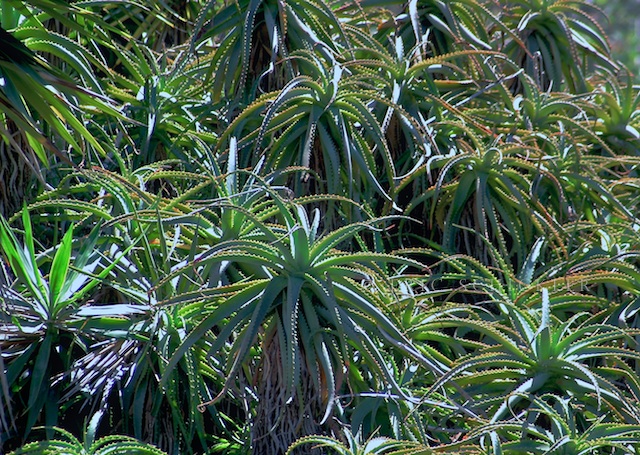 Even when the hot humid days hit, by midnight it was comfortable and the large ceiling fans were the perfect touch. When the tide came in during the night, the roar of the waves, just 200 yards away, would often wake us. But who could ever complain about the rhythmic crash of ocean waves, even at 2 a.m.? It was another example of nature’s music on the Osa Peninsula.

To continue the travelogue, click here to go to Part 7:

All photography, text and artwork seen here is copyright-protected and the exclusive property of Eric Schickler Adventure Photographer. No downloading, use, reproduction, manipulation, sale and/or distribution permitted without express written consent.