The calm, clear, deep waters of the Golfo Dulce, and the Pacific Ocean just a few miles off the coast of Matapalo, offer world-renowned fishing for many species. 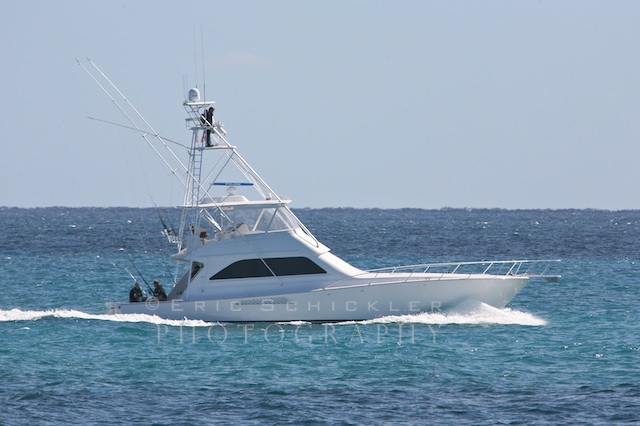 The waters of Golfo Dulce are exquisite—calm, clean, and, at 84 degrees, very soothing. The waves rolling onto shore are quite gentle in good weather, just a few feet high, but still fun for boogie-boarding or body surfing. Night-time swims are a special treat, especially with the warm glow of the moon overhead, floating in the hazy, moisture-laden sky.

Iguana Lodge is situated near Playa Platanares and Playa Cienega, near the middle of an uninterrupted six-mile stretch of gorgeous beachfront.

We saw just a few dwellings along the entire stretch, and most of them were tucked back in the jungle, far from the beach. We walked the beach routinely at dusk and dawn, covering miles at a time, and rarely saw another person. The resort’s resident dogs, “Osa” and “Bam-Bam,” often served as our escorts. One night was especially remarkable. We walked for two hours at low tide, wandering far from the beach to explore exposed sandbars far out in the water. 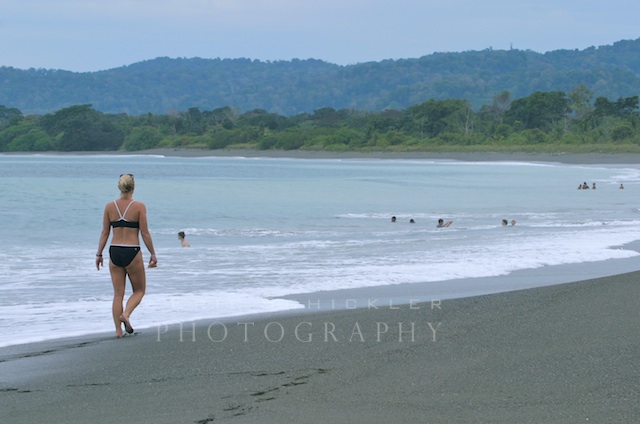 On another night, our friends from England joined us. Derric decided he was going to skinny dip for a bit. We lost him for nearly 30 minutes as he waded far off into the surf. His wife held his shorts over her arm as we walked the beach; their presence was a direct reminder that we best reunite with him at some point. We knew he wasn’t going back to the resort without us.

The waves kicked up a bit as a small weather disturbance rolled out over the gulf. I saw some boogie boards lying on the beach and decided it was play time. My first and only attempt at boogie-boarding that night resulted in total disaster.

A big wave caught me the wrong way, driving my head underwater and into the sandy bottom. It also worked its magic on my shorts, pulling them down to my ankles. This made swimming difficult and provided me a shining 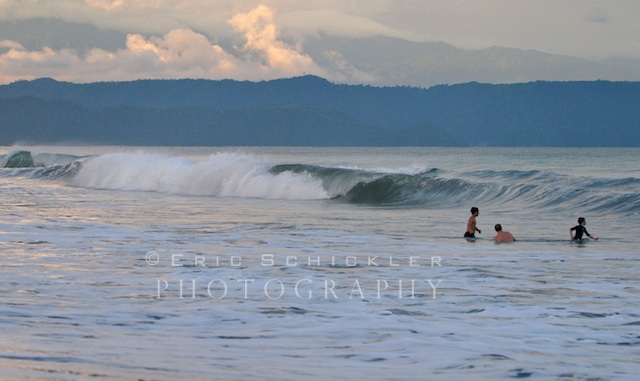 opportunity to laugh at myself. Ana had a laugh too.

After bringing my shorts back to their upright and locked position, I rose up out of the foamy surf, hair full of sand, salt water in the eyes, ears, mouth and nose, boogie board rendered useless–broken in half. To the shower I went, with head held low.

Walking the beach was gratifying enough. But flying down the sand atop a frisky horse was something I’ll not soon forget. It was a far cry from the riding we are accustomed to in Colorado, often trudging up dusty, rocky trails, sometimes alongside precarious drop-offs.

Galloping unencumbered and free, on soft moist sand, with an ocean breeze blowing at your face, was akin to skiing deep, dry, light powder on a sunny Colorado morning in Vail’s vast Back Bowls. No set trail, no obstacles, no people, no timeline, no worries.

Just Ana and me and our guide, Ivan. Pura Vida! Ivan knew the area we were exploring very well, as if it were his back yard. And by golly, we learned that it was his back yard. His family had lived on this large plantation for more than 100 years. Iguana Lodge just happen to be his most recent neighbor.

After our three-mile sprint down the beach at low tide, we toured along a cove near Puerto Jimenez, observing the fishing activities on the pier, and some tourists boarding the small tour boats.

We wandered onto a trail into the jungle, and later emerged onto Ivan’s large plantation, where we followed a small creek we eventually needed to cross. It was a thrill to ride a “swimming horse,” with water up to my ankles! 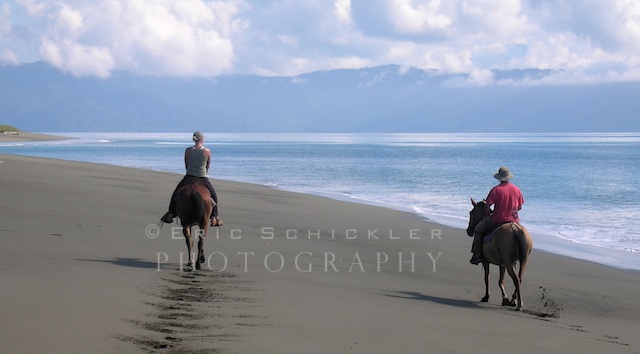 Suddenly we were back in a huge lush green meadow, just moseying along on Tico time. The meadow was surrounded on all sides by dense forest. As with the entire three-hour ride, it was peaceful, scenic, serene, ridiculously pleasant. 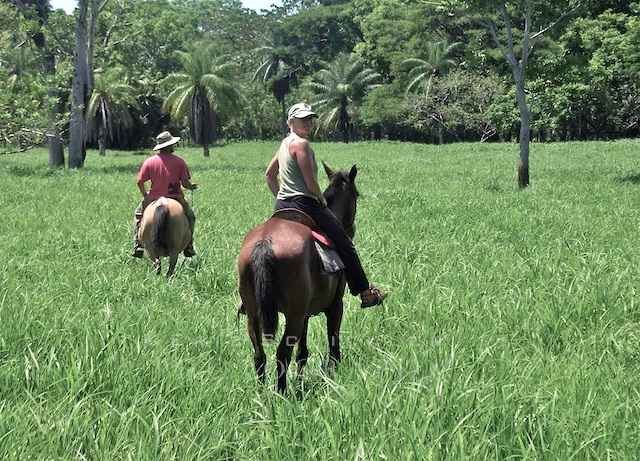 We found a shaded, tree-lined dirt road, and this final stretch afforded us and the horses a welcomed cool-down as we completed yet another rewarding Osa adventure.

That afternoon we meandered 300 feet along a trail through the trees to another part of the Iguana Lodge Resort.

This historic building, called “The Pearl of the Osa Hotel,” has a handful of affordable rooms on the top level, and a restaurant and bar below. It is open to the public, so it’s a great place to meet some of the local people.

We learned that The Pearl was a convenient spot to enjoy a quiet, relaxing lunch, and had an unencumbered view of the beach, the expansive gulf, and the cloud-forest mountains off in the distance across the gulf. Like the “Rancho Grande” Main Lodge, this restaurant and bar was also an open-air structure. At the Iguana Lodge Resort, anytime you were inside a structure, you still felt like you were outside!

Fiesta at the Pearl

Every Friday night, the staff throws a special party at the Osa, called “Salsa, Pasta & Locals Night.” I found out later that the salsa was the dance, not the sauce you have with tortilla chips. A sad surprise as I did not wear my dancing shoes. The creativity and flavor of the various pasta dishes continued our week-long series of culinary surprises. 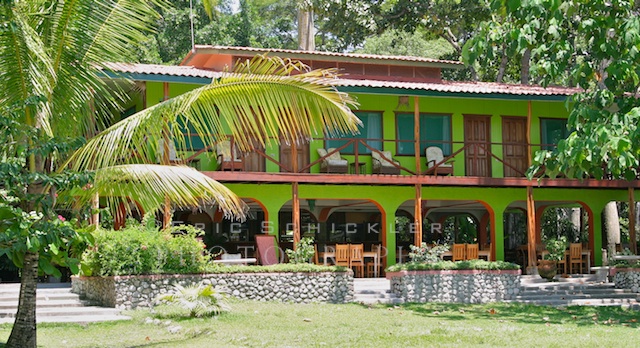 We found that same short trail through the forest, which was now candle-lit in the 7 p.m. darkness. It was to be the most boisterous environment we had experienced all week, and quite a contrast from every other moment at the resort. But we were ready for some partying and live local music and a chance to interact with the locals 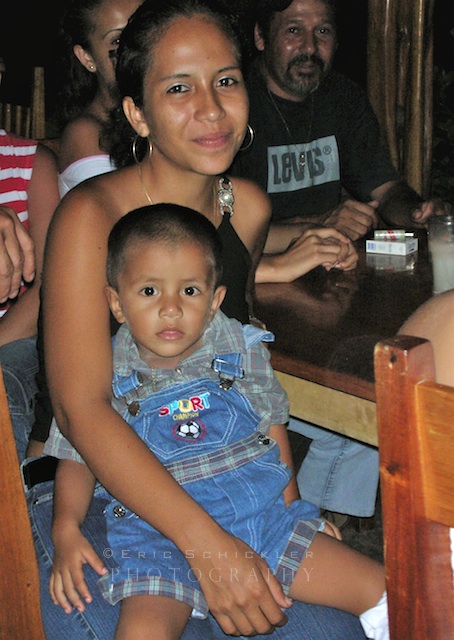 I made a feeble attempt at learning some Salsa moves, but to no avail. The locals found me rather entertaining. Hey, I’m from Colorado! My natural reflex is to ski, not so much dance. Besides, I’m wearing sandals!

Ana did a much better job faking it. But she looks great skipping rope; even better dancing. “Woo-woo, macha!,” the Tico men shouted.

We met some very friendly locals; entire families showed up. We liked these people. We liked their zeal for simple fun. Everyone got along handsomely.

Live music is rare on the gulf, outside of Puerto Jimenez, so this was a treat for those who live nearby. The food, the camaraderie, the music, the dancing and the frozen fruit daiquiris were a a potent combination. It was quite the festive night.

We slipped out of the wild weekend celebration early and returned to our quiet secluded casita. The rhythmic beat of the salsa band and party chatter were quickly replaced with the more soothing rhythm of rolling waves on the gulf.

The next morning, we set off on an adventure that would lead us to a fairly famous tree on a mountain ridge overlooking the Pacific, at the very tip of the peninsula near the small town of Cabo Matapalo.

The best feature of this town is its back-door access to Costa Rica’s incomparable Corcovado National Park, via Carate and the La Leona Station, just to its north.

Indeed, the Osa Peninsula’s primary allure is Corcovado. There are plenty of superlatives that spring forth at the mere mention of this park’s name.

— “The most biologically intense place on the planet.”  — National Geographic Society

— One of the highest rain forests in the world.

— Home to some of Costa Rica’s most endangered plant and animal species. 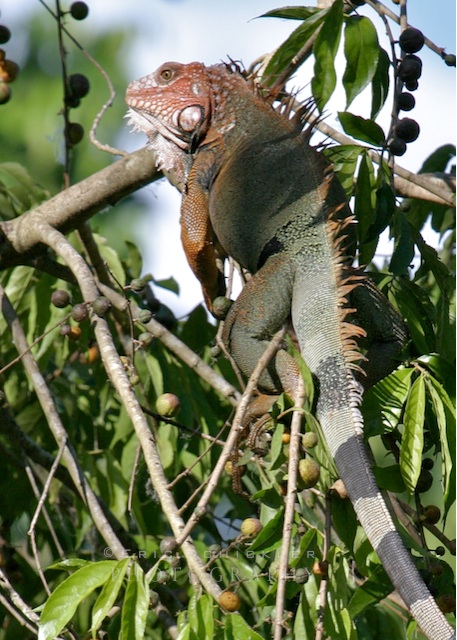 All four species of sea turtle can be found here: the Pacific Green, the Olive Ridley, the Leatherback and the Hawksbill. Beware of running into the country’s deadliest snake, the very aggressive Fer-de-lance, which is rather common.

The pristine park is very wet and remote, but has good trails and guided tours, enabling hikers to see a wide variety of flora and fauna. Three-day/two-night tours are recommended to even scratch the surface of exploration, and to reach the interior of the park.

To continue the travelogue, click here to go to Part 5:  http://adventurephotographer.us/costa-ricas-osa-peninsula-part-5-tarzan-and-the-giant-strangler-fig-tree/

All photography, text and artwork seen here is copyright-protected and the exclusive property of Eric Schickler Adventure Photographer.

No downloading, use, reproduction, manipulation, sale and/or distribution permitted without express written consent.