Sasha’s gone now. Unfortunately gone before anyone ever figured out why she had such a high oral regard for rocks.

This fixation rarely escaped any observer’s attention. “Did you know your dog is eating a rock? Look at what your dog is doing to that rock!”

She came to rely on her rock slobbering habit as a means of personal preoccupation at any social gathering, much like humans do with an alcoholic drink, cigar or cigarette. Or like what some people do with a pen or pencil at a business meeting.

At any outdoor event (usually a campsite, bonfire, or picnic) there would be the usual introductory greeting of guests, social licking, tail wagging and running about.

But after about two minutes of that, the search engines would activate, resulting in a very short, ceremonial scan of the landscape, a quick selection of the targeted granite, a few foreplay pawstrokes, and final stabilization maneuvers.

With the rock now firmly secured between both paws, she’d slowly lower her back side down and, in the sphinx position, commence to slobbering.

In a matter of minutes, the rock, both front paws, the dog’s entire lower jaw area and the ground beneath was covered with a foamy salivatious slobber. And Sasha was in her most preferred state of happiness.

“Have your cold beer, have your cigars and cigarettes. Engage in your petty human conversation, I’ve got my rock, and I’ve got it where I want it! Nothing can distract me from my sweet companion, except a piece of chicken maybe, or an invitation to go for a hike (and even then, you can bet this baby’s coming with me!”)

That leads to another strange behavior:  Oral Rock Transport.

There were many occasions when she’d somehow get a rock twice the size of her head into her jaws, in order to carry it along on the start or continuation of a hike. Or sometimes it was just part of a show around the campfire. This act was particularly disgusting because of the drool that would sneak out of her jaws, cascade off the rock and dribble to the ground.

“Just in case none of you noticed, I’ve got the world’s best rock here and I’m certainly enjoying every bit of it. It’s mine, of course, but I’d like you to notice very plainly the great command I currently have over it. So I’m gonna get this big sucker in my mouth and just kind of walk back and forth in front of you in no discernible direction, just to get some attention and perhaps a comment of astonishment from someone who hasn’t seen this before. After all, for those of you who didn’t know, and any of you who may have unfortunately forgotten, I am the Rock Meister!”

We’re talking about Rock Lock-Jaw. Somehow she got the thing in, but sometimes getting the jaws open enough to get it out was another thing altogether. This would result in a very peculiar, confusing and embarrassing situation for Sash. In her instinctive effort to please her master and comply with the command to “Drop The Rock!,” she’d attempt to let it go, but to no avail.

This situation would bring roars of laughter from onlookers, much to Sasha’s frustration, as she’d walk about aimlessly. Sometimes it would be necessary for her to lie back down on the ground and position her head sideways to get it out, or she’d need the help of her master. Once freed, the rock was again fair game, of course, and the slobbering would begin all over.

“Old Flat Teeth” became another of her many nicknames. Years of rock interaction and transport resulted in a dental display that could make any dentist shiver.

Rock interaction was obviously an outdoor past time, made convenient because of the prevalence of rocks in the Rocky Mountains. I honestly believe that Sasha’s heart leaped to a higher height when we move to Colorado. Granite around every corner! And much easier to locate because of the semi-arid landscape.

Occasionally, though, Sasha would attempt to bring a rock indoors. This was obviously a canine mental lapse. She knew fairly well that rocks were outdoor toys. But once in awhile, caught up in the joy of the social moment, she’d follow the fellas into the house, condo or cabin with toy in mouth. A pre-slobbered rock lying on the carpet gets attention really fast.

She put in ten robust years of travel and adventure……

The Bristol Mountains and Finger Lakes of Upstate New York.

On the summits of 17 “Fourteeners.”

The deserts of Utah.
On a canoe in the Colorado River.
At private parties and picnics.
On camping trips.
Along the streets of Vail.
On the ski trails of Arapaho Basin.
Even in business offices in several states.

Chasing the squirrels. On the golf course. In the backyard.
Chasing the Gray Jays (Camp Robbers) at the campsite.

The two most memorable chewing-stage victims:
My dad’s riding lawnmower seat (I’ve never seen Dad so angry; he really took pride in that mower, I guess.)
A very tall and prickly potted cactus. In this case, the pooch’s paws, mouth, face and digestive tract were the victims.

Even at ten years of age, this dog was still regarded by strangers as a puppy.
“Nice puppy” or “How old is your puppy?” or “Here, little puppy.”
“This puppy, my friend, is old enough to be your mother!”

She was a follower as is any dog. But also a leader.

A comic, a social butterfly, a daredevil, a hiking machine.
Squirrels beware! — she does the 100 in 9.5 flat and has excellent brakes!

What social gathering was complete without the entertainer?

Full-speed darts into the darkened woods after a thrown rock.

She could marvel and baffle my new acquaintances, and she knew they were watching.

She’d remind my existing friends that she was still hard at work, comfortable in her role.

She had mastered the delicate balance between independence and loyalty, aggressiveness and gentleness, playfulness and serious canine communication when a point had to be made. 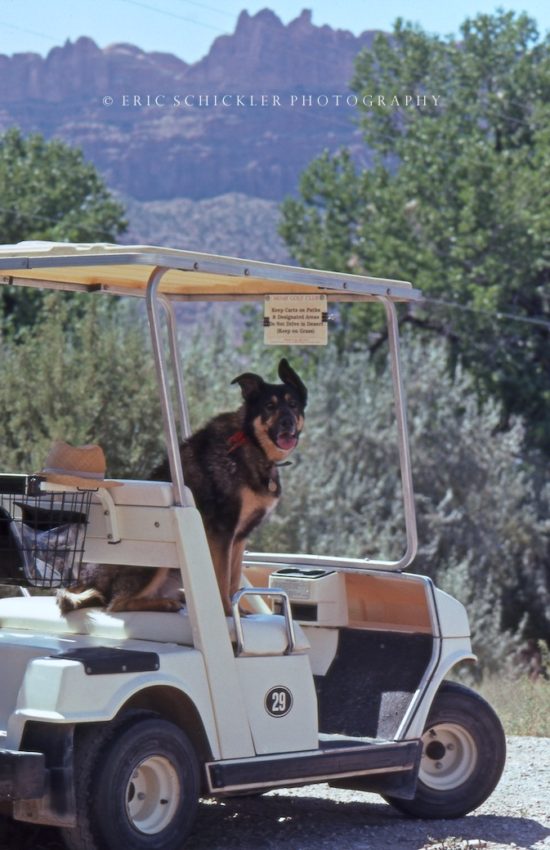 Rock On, Sasha!
Thanks for the Memories.