There once was a work of art who was a cow. And a cow who was a work of art, a piece of work, a one-of-a-kind, you could say. This notorious creature wore all the colors of the rainbow. Her decorator, Alex Knuckles, a student from Mexico attending Colorado University, wrapped her in the vibrant colors and artistic style of his homeland. This cow was born to party, so it made perfect sense he named her “Moocho Fiesta” (“Big Party”).

She had the sense that she was from good stock. In fact, she was worth a barnyard full of pesos, and in America fetched a fistful of dollars.

She was one of many painted cows at the 2006 “Denver CowParade.”  Prior to the Denver CowParade in 2006, this charity fund raising program had visited more than 25 cities around the world, and raised more than $11 million for a variety of charitable organizations.

It helped create temporary public works of bovine art, which were then auctioned off to people who desperately needed some very unusual yard art. 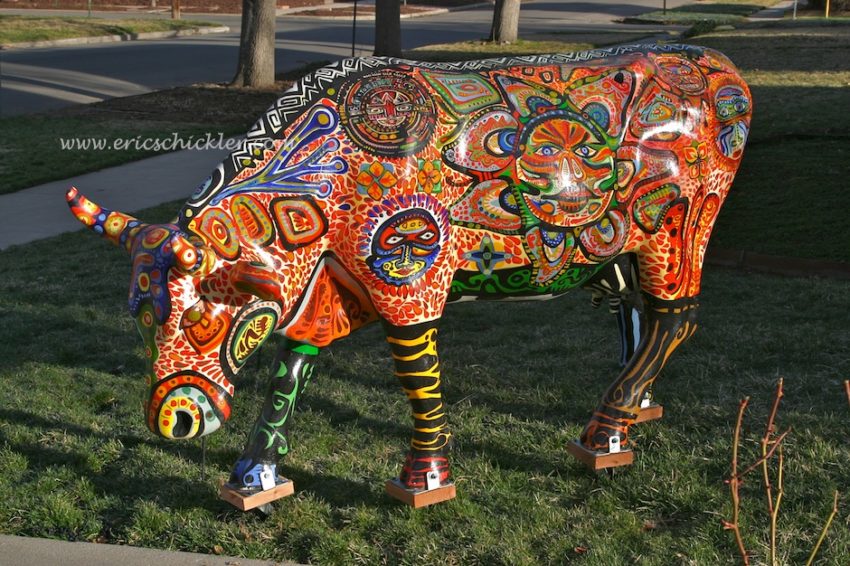 Moocho was one of several dozen Denver cows at the glitzy charity auction event, and probably not the prettiest and most popular in the herd.  But her bidders were instantly enamored by her visual brilliance, even if her head was full of air. Even if she was dumb as a cow.

The purchase of Moocho was somewhat of a fluke.  Other bidders were apparently moooved by more appealing cows, so bidding was sparse on Moocho.  Adult beverages, the charitable spirit of the moment, and a loose arm raising a bidder’s number card quickly turned into a unexpected winning bid. “Moocho is yours!” came the auctioneer’s quick and direct declaration. And with that, a residential plot in the city was about to become a farm.

While the final bid was lower than that on other cows, it was still a hefty amount for a hand-painted, hollowed-out grazer. Besides, walking home, down city streets, towing a life-size cow replica was not part of the evening’s plan. But they made no beef about it and gladly paid the cattleman.

Once situated at her new residence, this color-branded bovine kept the neighbors entertained and was the centerpiece of front-yard gatherings in her tiny pasture in an East Denver neighborhood. On rare occasions, she was known to join in the happy-hour fun, balance a beer on her back, and a pretzel on her rack.

She kept the grass and ground cover neatly trimmed. And she never made a mess. She sought refuge in no barn during many a Denver winter, unwilling to hide her hide, preferring to brave the snow and cold, confident her colors would fend off frostbite.

But over time, Moocho grew tired of her sedentary, confined existence in one small city plot. She tried to ramble. She tried to escape several times. Her owners were forced to chain her up. A cow on a “leash?” I know… it’s sad, pathetic and some might say cruel.

But Moocho had the stamina of a bull, and wasn’t about to be confined. One day she broke her chain, and tried to launch off a large snowbank in the fenced-in back yard.  Cows tip; they don’t jump. It was an ugly landing.

After a few months chained up, Moocho finally came up with a very clever idea. She turned to a whole new strategy. After offering a full year of fresh milk as an incentive, she somehow convinced her owners to grant her the privilege of her getting own USDA-approved wheels. Kind of like when your kid gets roller skates.

It worked! After that, no yard was safe, and Moocho was free to take her big party just about anywhere.

Her former low-commotion days of hoofin’ it around a single yard were over. She was on a roll. She now coasted through life. Milked it for all she was worth. She wasn’t about to let anyone put her out to pasture. Moocho was gonna grab the bull by the horns and find whatever pasture she desired. 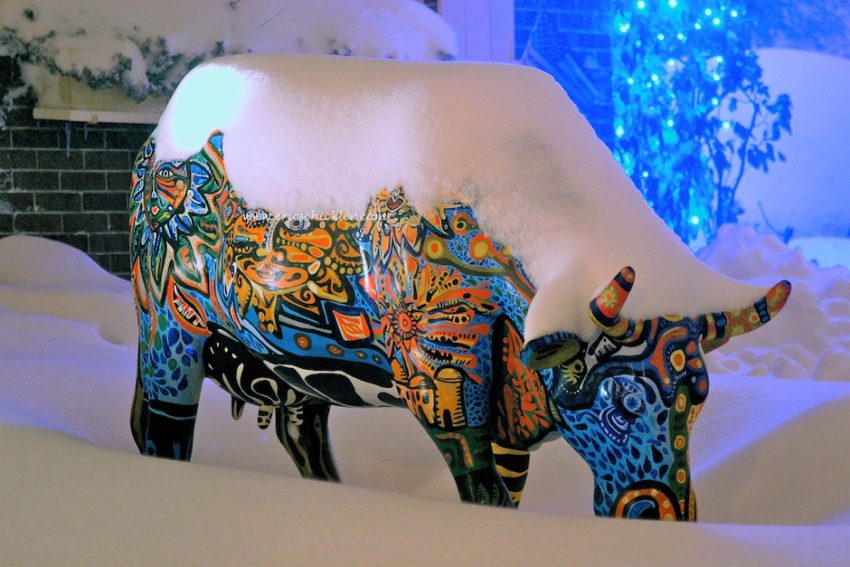 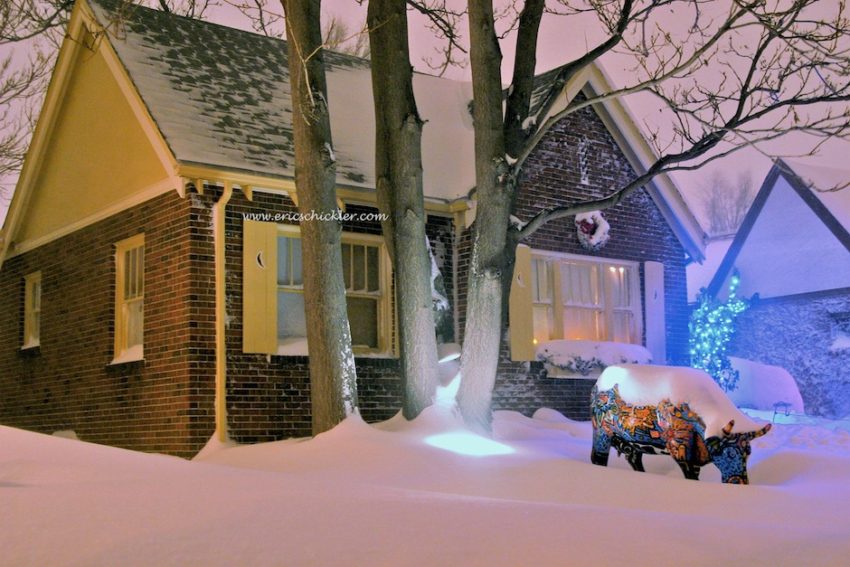 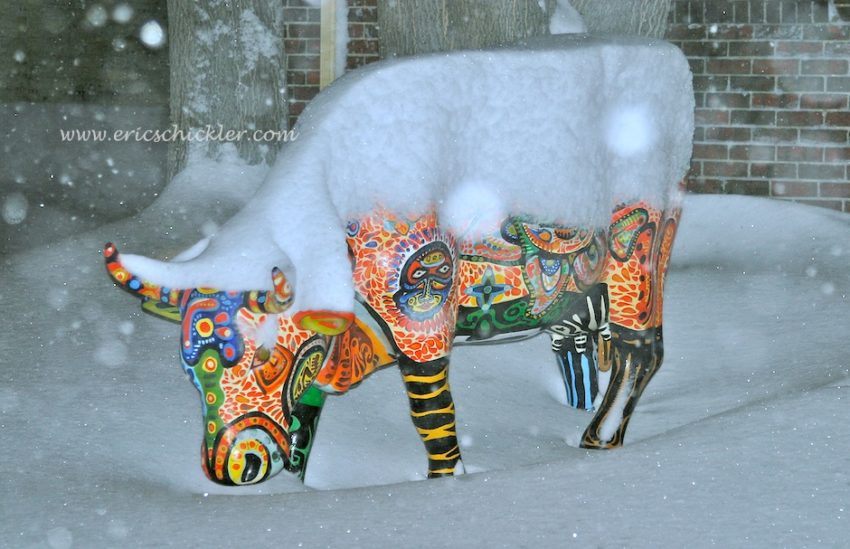 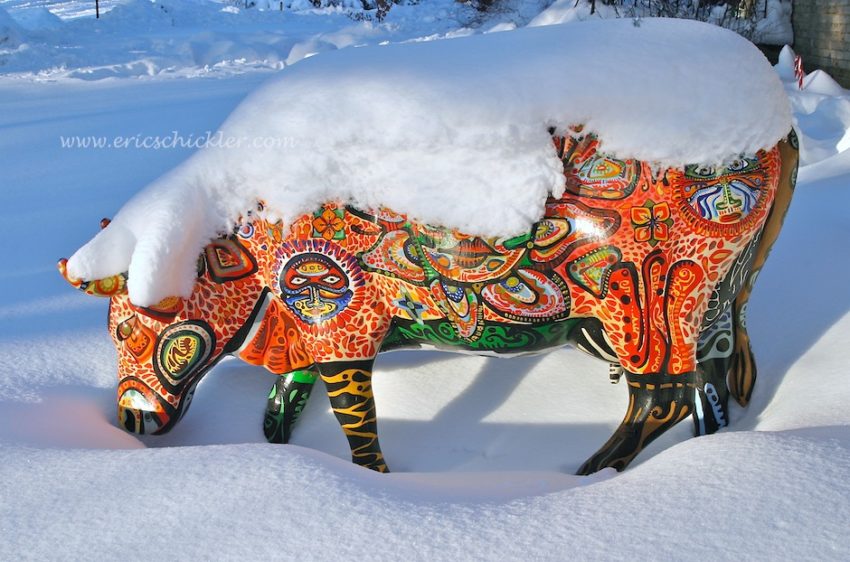 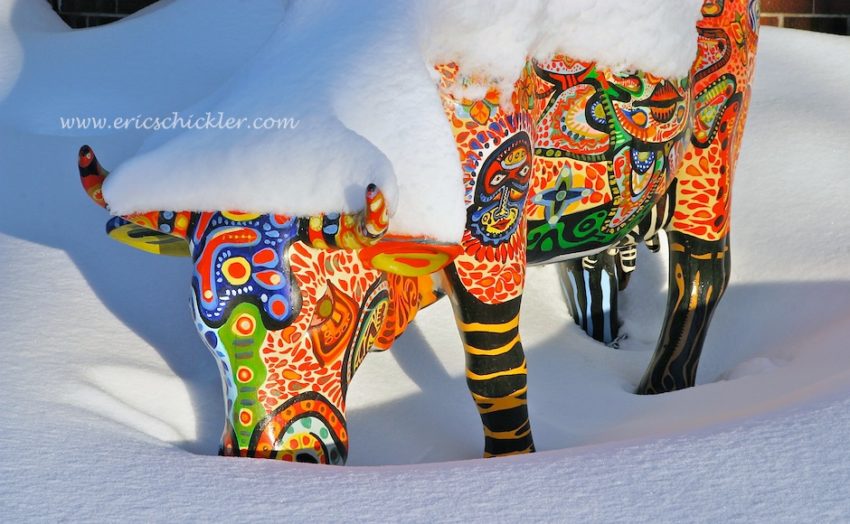 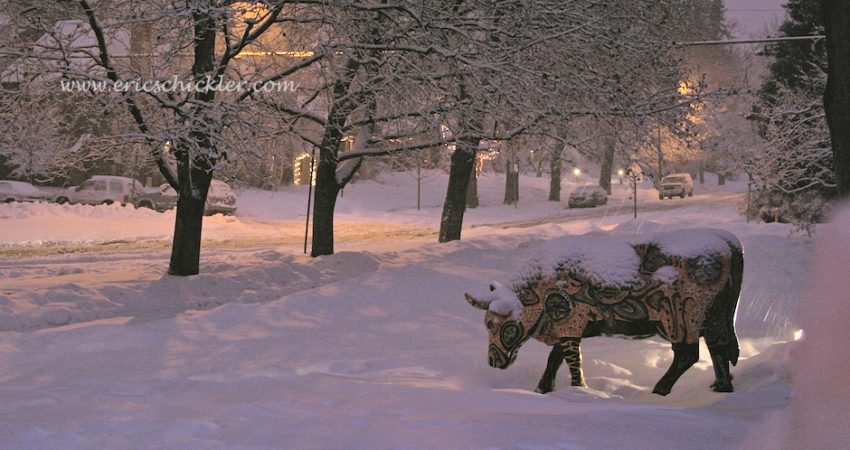 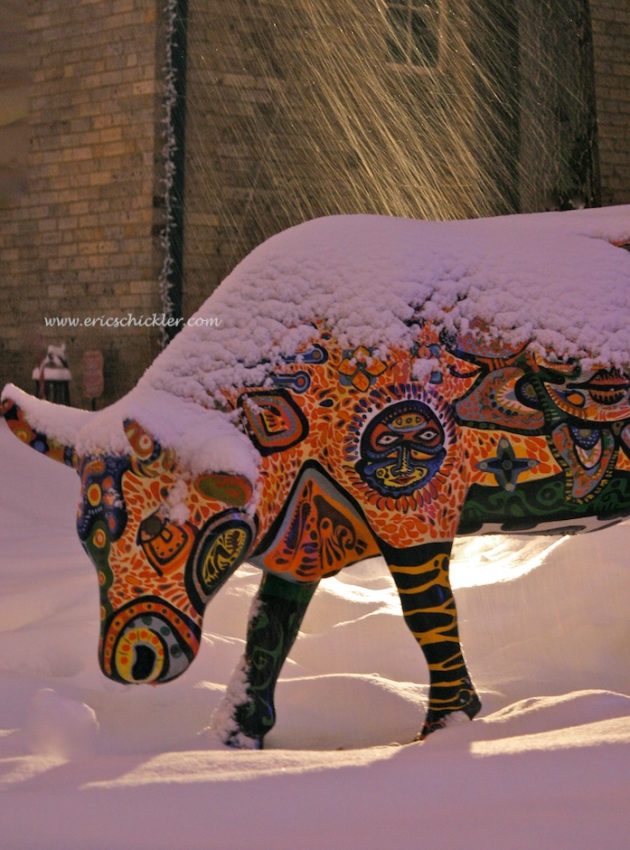 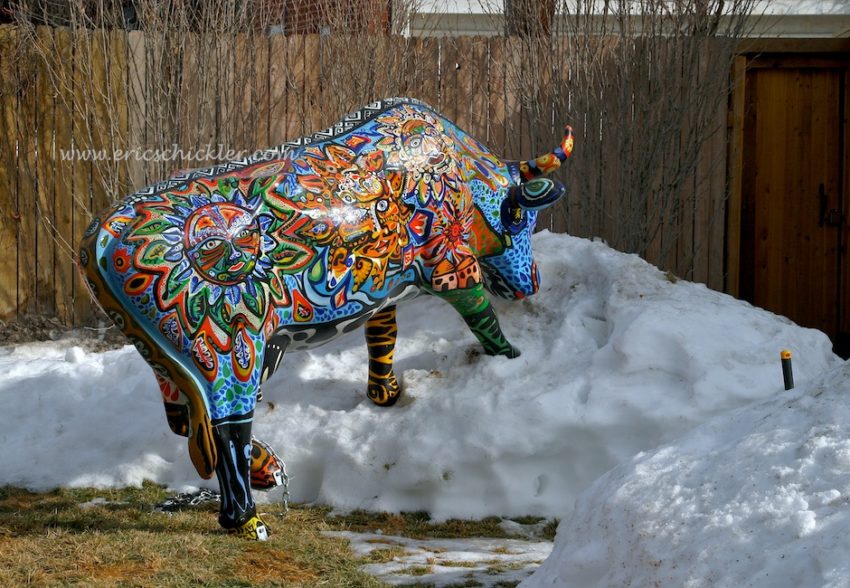 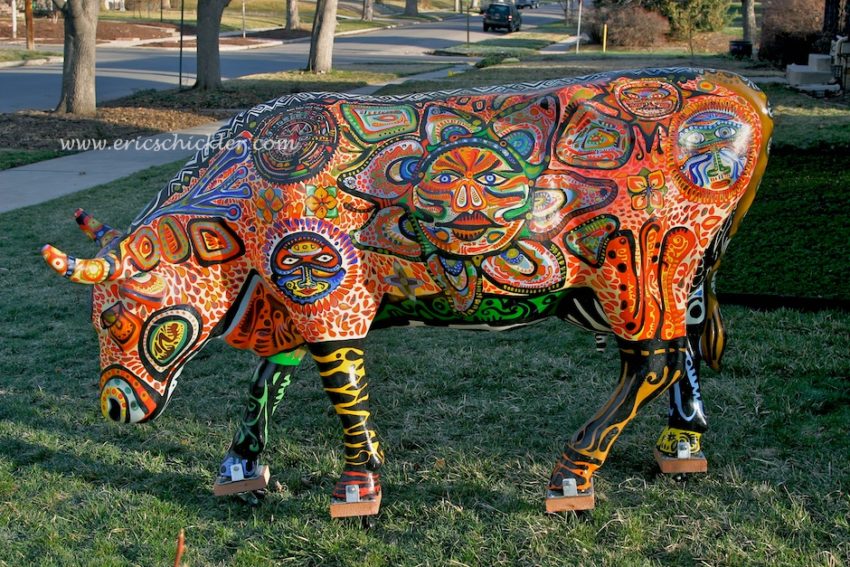 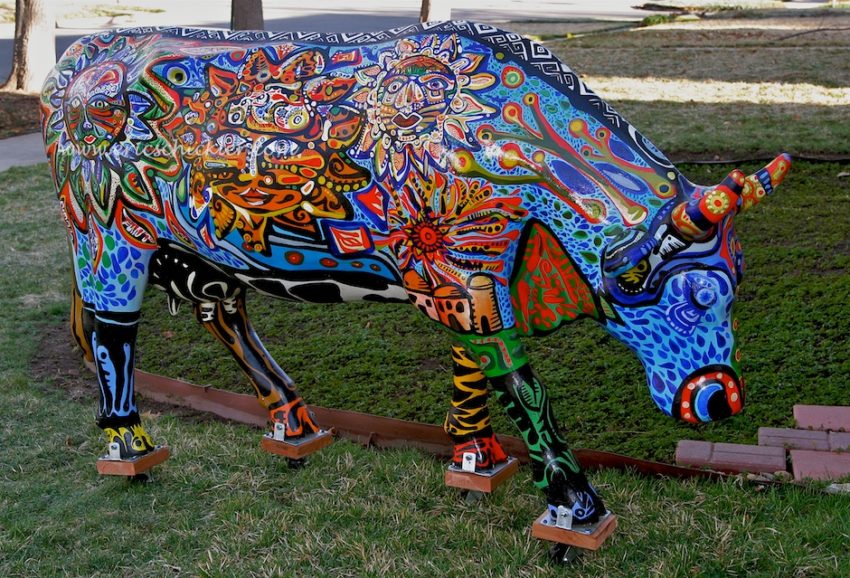 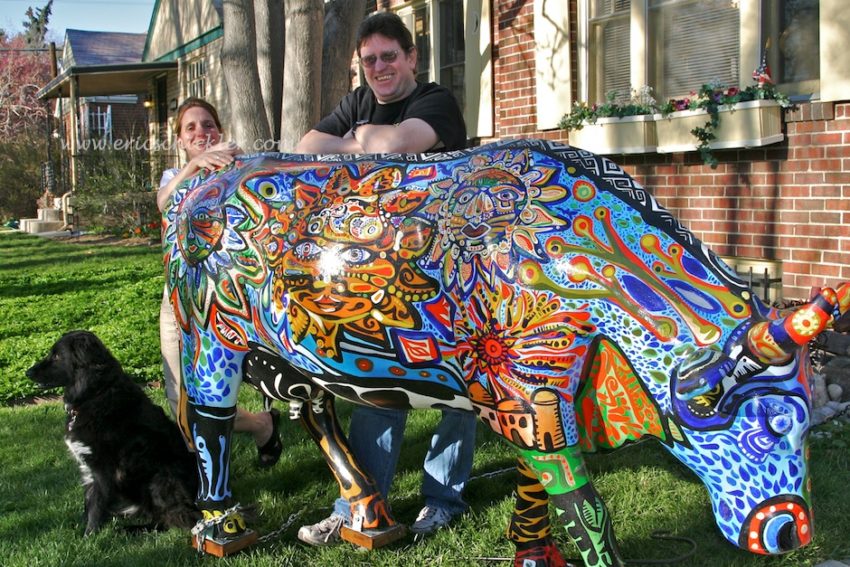 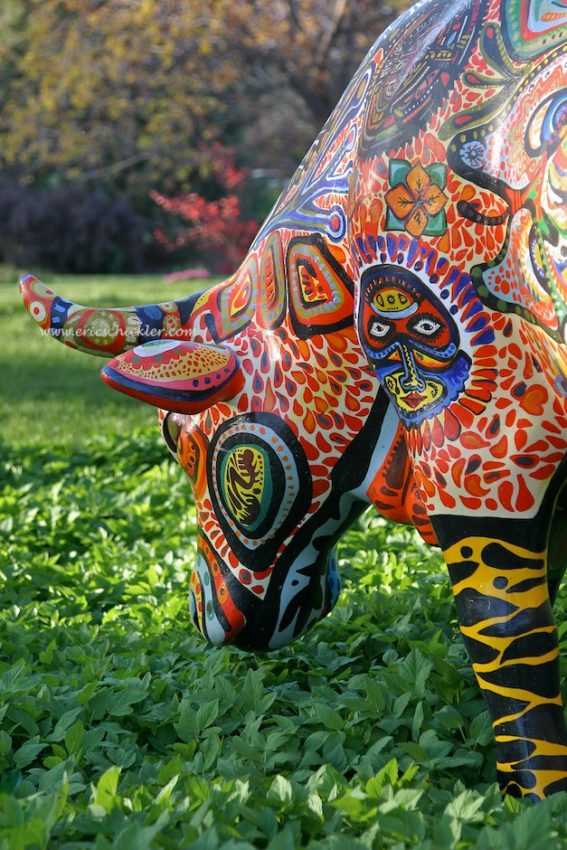 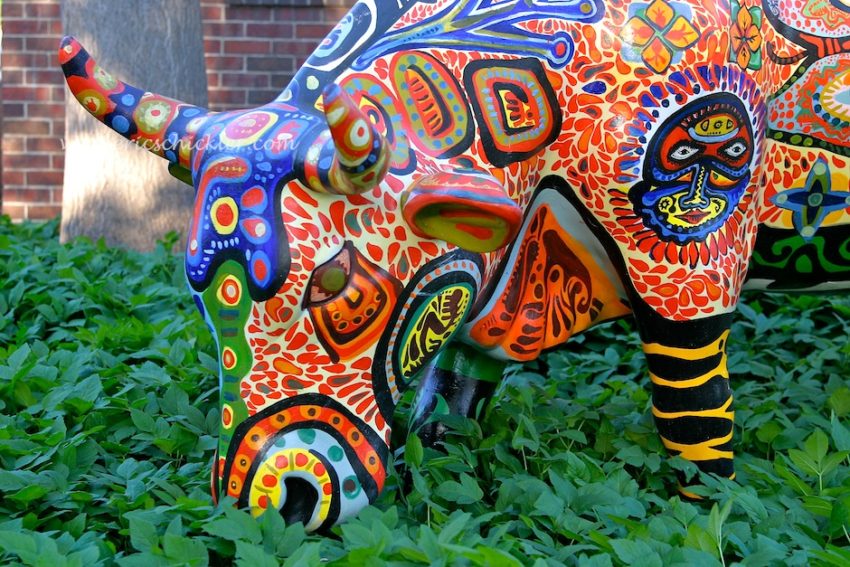 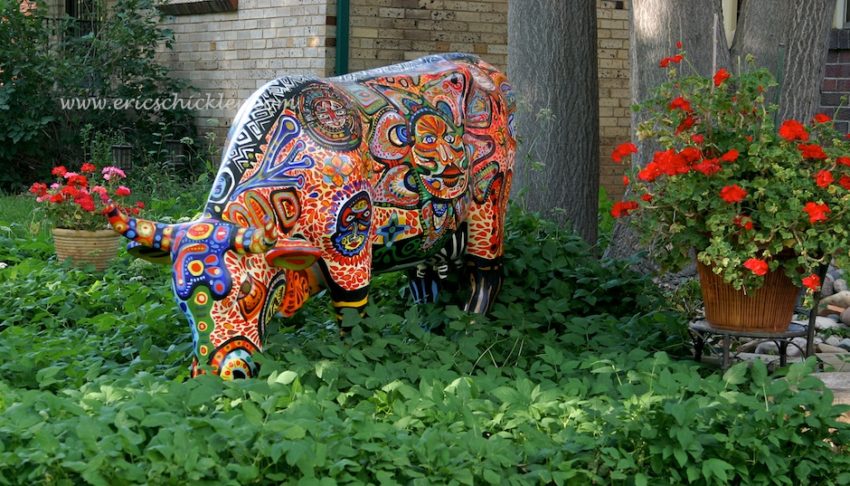