Tent camping at high elevations in the Colorado forest is a gratifying experience, and I am most happy when I’m in that place. I sometimes camp solo, for various reasons—some intended and some due to normal circumstances. One is that few people, except maybe hunters, long to sleep on the cold ground in autumn. But I do. I usually decide just a day or two in advance—when I see a window of opportunity—to flee the rat race for remote, quiet, elevated places of solitude.  I grab my camping gear, my cooler and trusty camera, and just run back to the hills, where I belong. 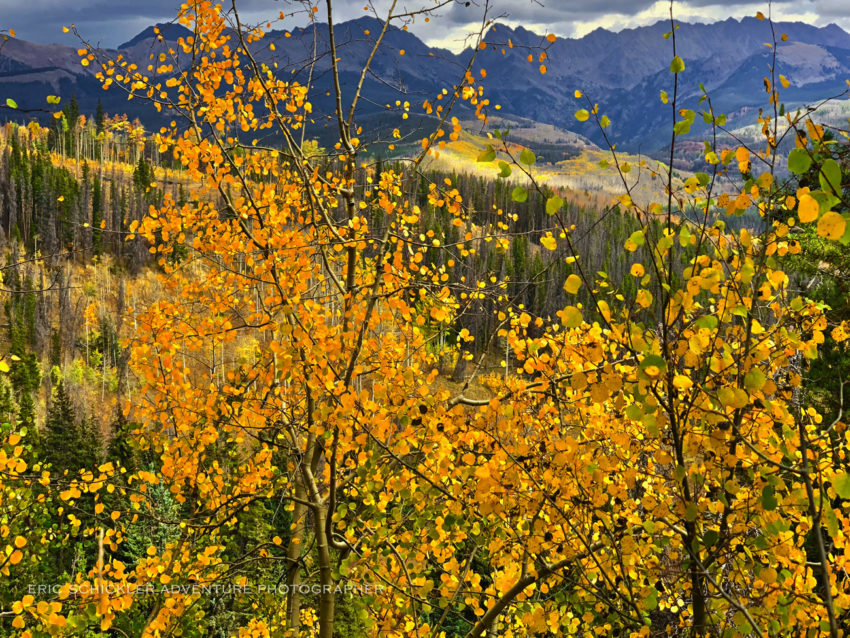 My last solo adventure was full of rewards. I secured one of my favorite camping sites, on the edge of a mountainside plateau at 10,500 feet. It offers stunning views over the Piney River Valley near Vail, and an unobstructed  look at a spectacular portion of the Gore Range.  The fall colors were near peak. The golden aspens were quaking. My camera was shaking. This was my mandatory annual Go for the Gold Getaway.

Incoming storms cells with sheets of rain and snow brought ominous clouds that raked and ravaged the Gore’s granite fortresses. Then they playfully exited the dance floor, and the sun would reappear. I had two chairs at the campsite. One on the plateau’s promenade for gazing the eastern horizon, the other inside my tent, for dry retreat when it rained. I did my own dance that first day—back and forth, back and forth—from tent shelter to sunny lawn chair as the storms came and went.

Nature and wildlife surround you in this place. There is rarely a dull moment. And even when dull moments happen, they are perfectly wonderful.  I spent a few minutes with a moose, then a turkey, and spied a few passing deer. I eased back in my chair to watch hawks soar high in the sky, swirling in huge circular patterns on the mountain air currents.

I saw snow fall on the mountain ridges in an early-morning storm, marveled at intermittent rainbows, and relished the spectacular sunsets that bathe the mountains in pink and orange.  As dusk fell, I heard the bugling of elk in the valley below. Then came the rising full moon from behind the jagged Gore Range. 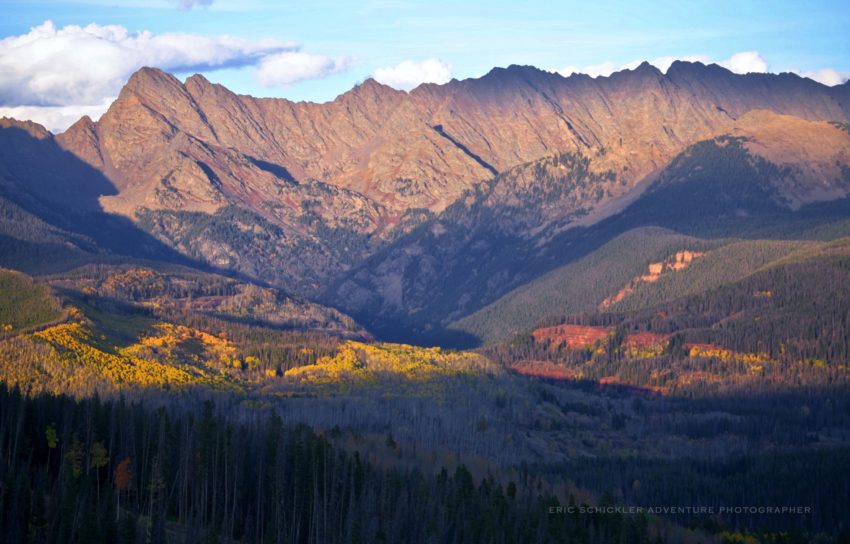 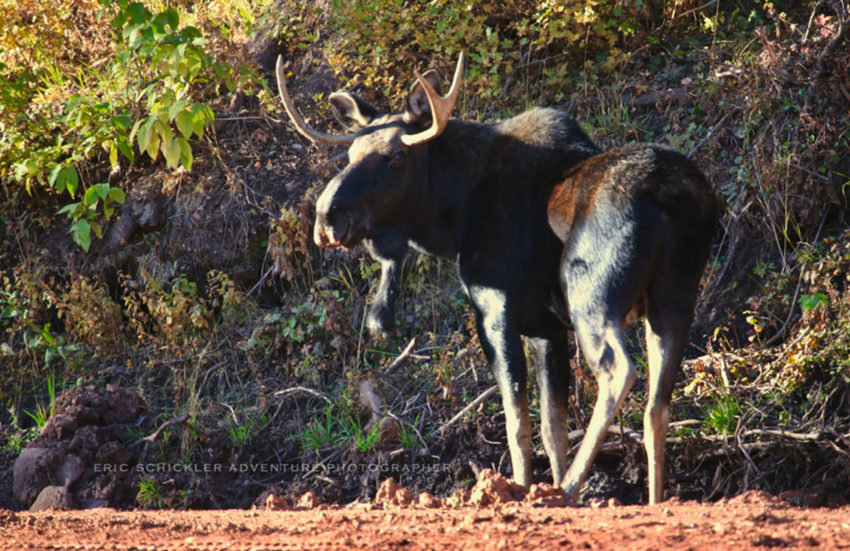 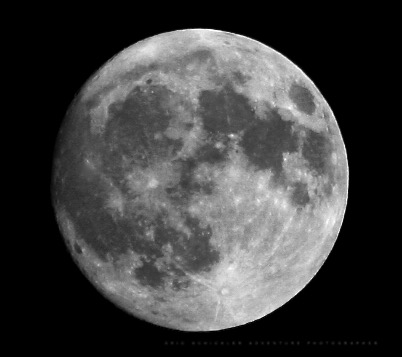 Of course, this fantastic natural environment is home to many animals, including our pudgy, lovable furry friends—black bears. This species of bear usually shows up in formal black, but you’ll see lighter coats like cinnamon or basic brown.  This is one of the reasons for my reaction inside my tent at 3 a.m.

Bears are normally very wary of humans. But this was a few days shy of October, and snow was starting to fall at high elevations, so bears were in full-on, fatten-up mode in anticipation of their winter naps.

I’m a very careful bear avoider. I eat “neat” around any campsite. No careless dropping of food scraps, no bacon grease on the ground, no N.Y. Strip steak fat mistakenly lying next to the tent. No fried chicken bread crumbs on the folding chair, no coolers left next to the campfire and no Snickers bars sitting on the car dashboard. I don’t even brush my teeth near the campsite. Bears are even attracted to toothpaste.

Before nighty-night, anything that is sweet, delicious or edible is always securely locked up in the car trunk, and the vehicle is moved a good distance from the tent. Anything edible that might be sleeping in a tent, of course, is fair game. 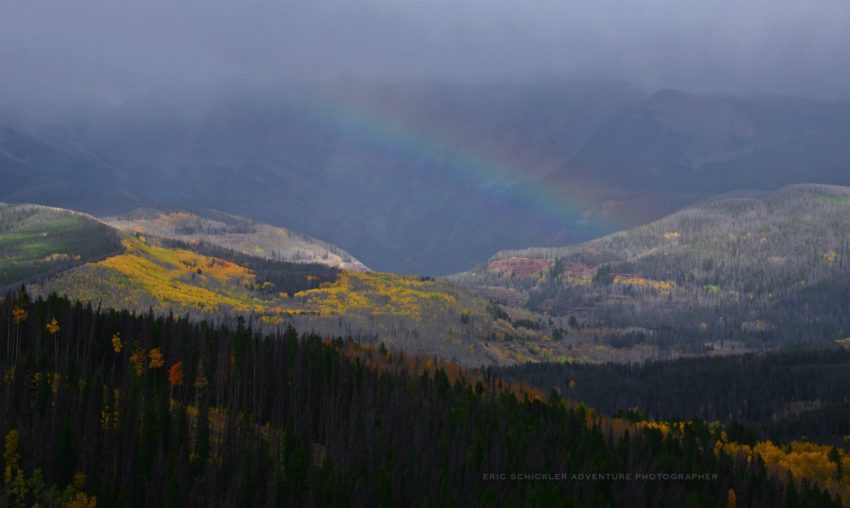 After a great sunset and subsequent rise of that full moon, all captured on the digital camera, I was thrilled to know that the moon would lighten the mood through the night.  Wildfire risk was high and a fire ban was in effect, so I spent two nights without the light, warmth and companionship of the traditional high-country campfire. This makes for a boring night, especially when camping alone, and lends itself to turning in rather early.

The landscape was painted with light and shadows, which is way better than mysterious, uncertain darkness. But still, there’s nothing like a big campfire to keep the night lively.  So, even with the moonlight, I was asleep in my tent by 10 p.m..

Bundled up in sleeping bag and blanket, snoring and snoozing like a wilderness baby, I woke but a few times in the peaceful 25-degree night. Coyotes howled briefly in the distance around midnight—a familiar and pleasant sound of nature (as long as it is off in the distance).  Breathing clean mountain air and basking in this happy solitude, I smiled and said to myself: “This is why I love camping. Coyotes howling at the moon.”  I’ll look to nature’s alarm clock—the warming sunrise and chirping birds—to wake me in the new day. I fell back into a deep sleep. 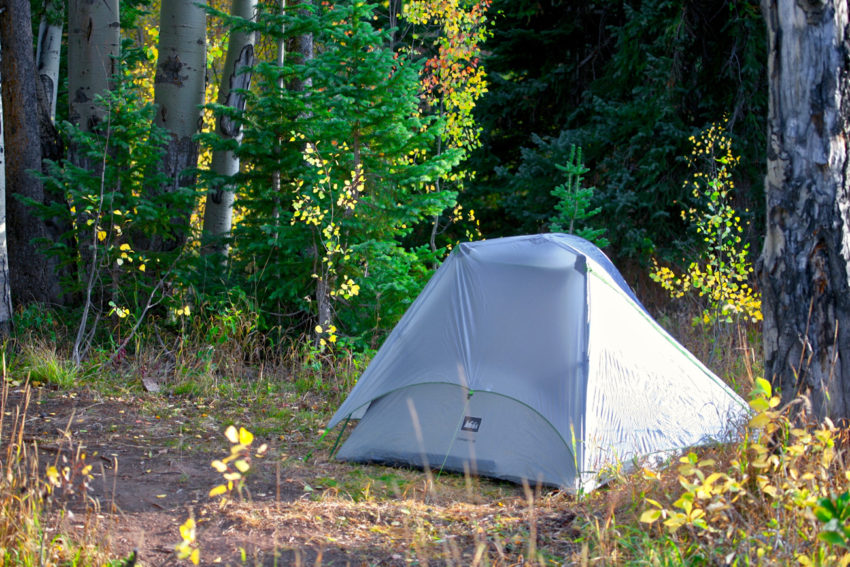 It was about 3 a.m., the full moon still high in the sky, when I was abruptly awakened. A large animal was at my doorstep, intent on joining me in my flimsy nylon habitat. And he was attempting entry in a very hasty manner, pushing himself up under the gap at the bottom of my tent’s rainfly.

I woke up instantly. Call it “forest-floor sleep mode.” You are camping. You have to be ready for any type of visitor. You may be sleeping soundly, but you have that bottom-line, top-of-mind awareness that you are alone and isolated deep in the backcountry—not at the Ritz-Carlton. I quickly realized something was amiss. With my blurred eyesight (contact lenses off) the moon’s light enabled me to see what looked like two large furry paws under the fly. Then I heard a grunting noise.

In a matter of seconds, I realized I was in a real pickle, a bind, a dire circumstance, a really bad situation. I was in definite peril. Would all my Vail friends be waking up to a front-page Vail Daily story about a hapless camper who was clawed to death, then turned into a delicious breakfast for some beast?

It was all happening way too fast. I hardly had time to reach for my gun. Oh, wait. I didn’t have a gun. Or an air horn. Or pepper spray. And I was wrapped up in my sleeping bag like some warmed up, pre-packaged burrito. “Adios, amigo” was all I could muster as a last-second memorial to myself.

Then that big slobbering hulk of an animal tried to ram through the mesh screen of the tent. Like a fool, I yelled: “No, go away! You can’t come in here.”  He tried pushing toward me again, ramming his big wet nose into the mesh, but he was miraculously held back, and temporarily retreated in surprised confusion over the nearly invisible mesh. I made a note to commend REI on the strength of their tent fabrics.

A third time he lunged forward, determined to rip through the tent, to get closer to me.

That’s when his big tongue came out and he tried to lick me through the screen.

What choice did I have? I launched a punch at him and repeated my protests: “Go away!”

And I’ll be darned. It worked. He finally retreated and was gone.

The still of the autumn morning returned. It was so quiet, it was like nothing had ever happened.

I fell back into a comfortable sleep for an hour or so, but later woke up in a cold sweat after having an unforgettable dream.  Okay, it was a terrible nightmare. Something about being dragged out of my tent, into the forest, down a steep gulch and into a dark hidden cave.

The next morning I visited the only people anywhere within miles of me. They were just 1/8 of a mile up the road.

I had to tell them.

And tell them I did.

“You guys, P-L-E-A-S-E do not let your curious, gregarious, bumbling Yellow Labrador run loose at night. Not only did he wake me up and scare the living daylights out of me, he almost ruined my new tent. Besides, that poor pooch could have a nasty run-in with a bear—or something even worse.” 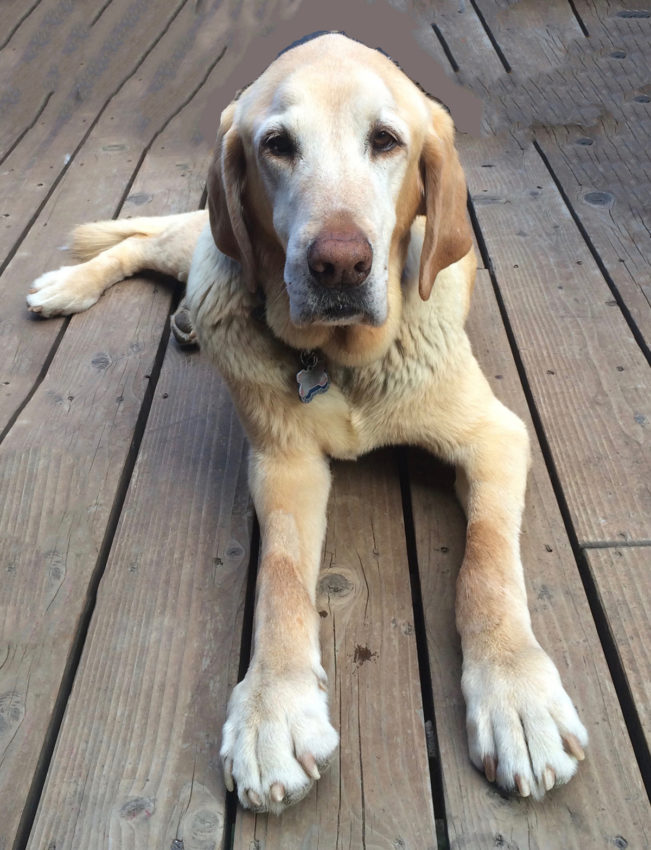 …and his ferocious claws.

“Sweet dreams are made of this.” 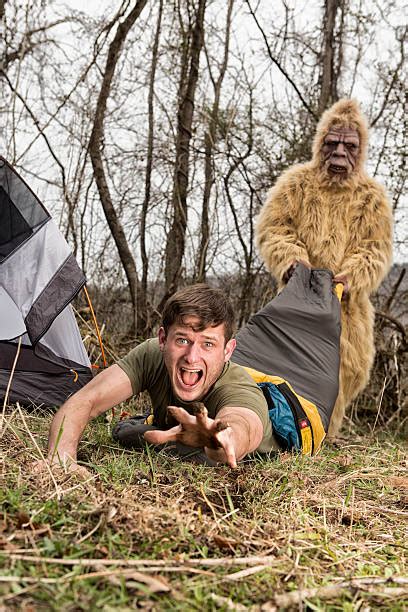 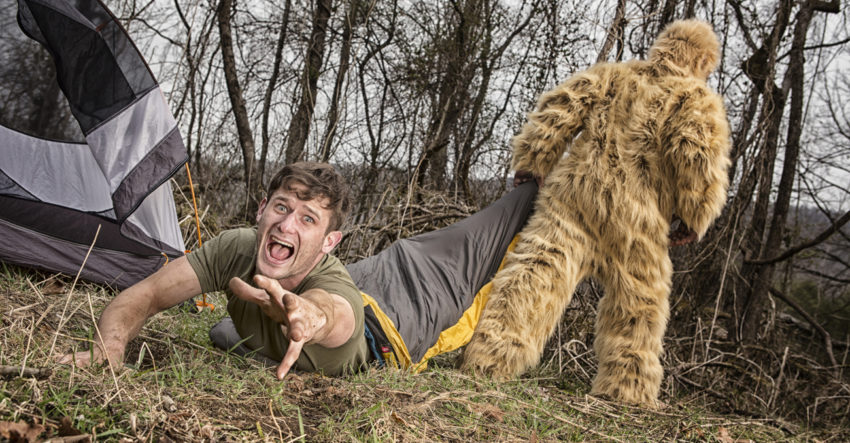 Even Sasquatches have cinnamon coats. 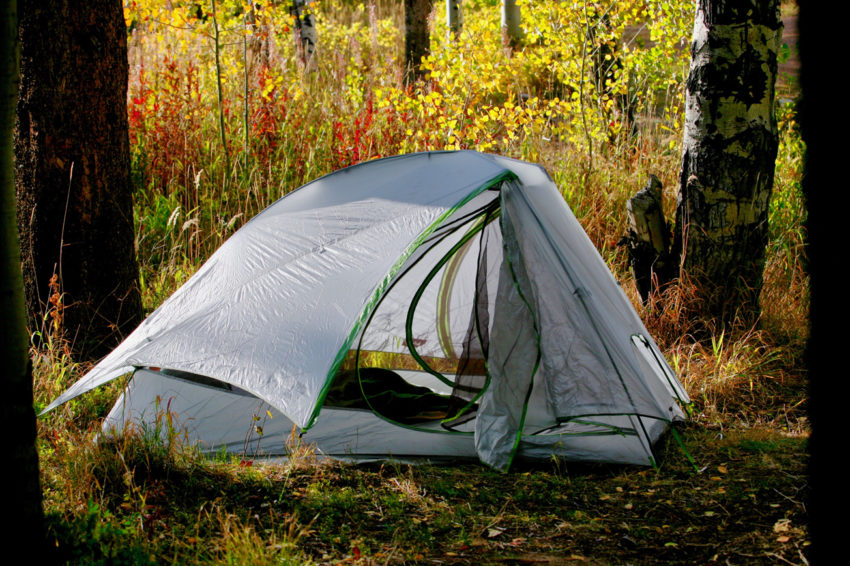 Yes, the morning after.

Happy to be awake, out of the tent and still alive. 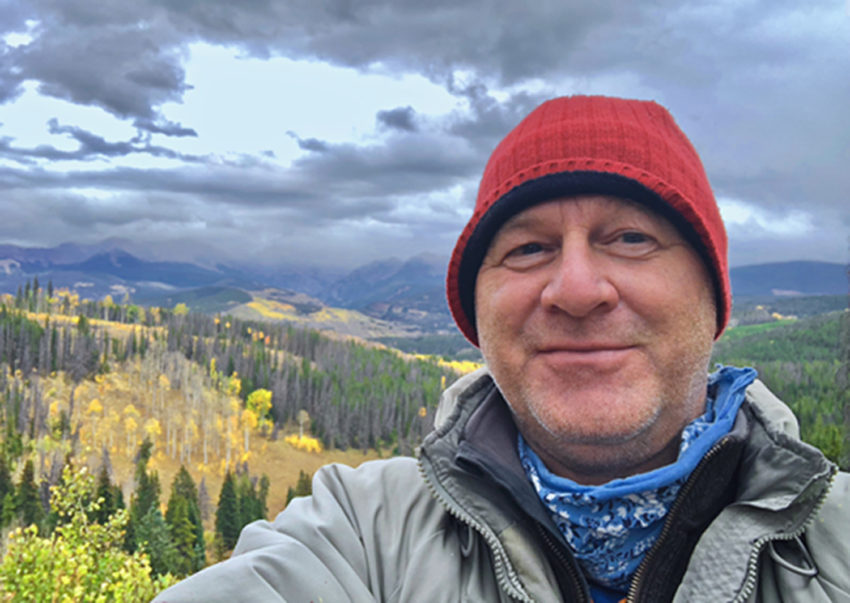