I’m not a big fan of creepy crawlers. Insects can become frightening monsters when viewed up close, when magnified by camera lenses or filters. You’ve seen the alien-like photos. Parents know not to show these images to their children before bedtime, or they’ll pay for it.

Sometimes, in the spirit of photographic documentation, I force myself to look beyond my fears, and capture images of nature’s small aliens.

The leggy green creature you see here caught my attention early one morning after I moved a large potted plant inside the house for the autumn and winter months.

This leaf-like bug had enough appendages to outperform any one-thumb hitchhiker you might find along the highway. But instead, he found himself unknowingly transported in piggyback fashion to a warmer climate inside a house. No need to use his many legs or wings to flag down a vehicle; he just needed to hang on tight for the ride.

As I moved the plant into a corner I came face-to-face, and bug-eyes to blue-eyes with him. After jumping back a few feet in total surprise, I eventually gathered the courage to introduced myself. 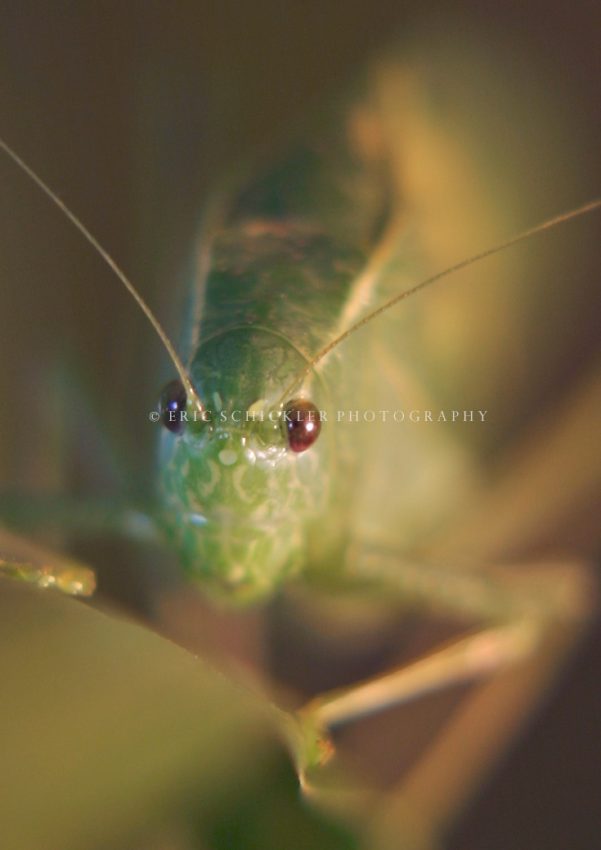 It was then that I recognized his eerie beauty, and asked if he’d be willing to pose for a few photos. Getting no auditory reply, I took his gentle antenna movements as an ambivalent “yes,” so off I went for my close-up filters, camera and tripod. I then arranged a red cloth as a backdrop for complementary color accent.

Two hours later, I had these images.

Yes, I know. I am easily distracted. Who could have predicted I’d be finishing my last cup of coffee with this type of unexpected visitor? While he was no conversationalist, he sure beat the unwelcome door-to-door solicitors who canvassed the city neighborhoods each day.

And how can you not love a face like his? I’m not sure who was more intrigued, me or him. He stared at me, and I at him. He’d move slowly down the long green reed and I’d follow, repositioning the tripod from another angle. Of course I chatted quietly with him all the while, trying to make him feel comfortable, and loose, and acting like himself, as I do with any subject in my studio.

I didn’t realize until recently what kind of insect this was. At first I thought he was a cicada, or a locust. He didn’t appear pious enough to be a praying mantis, and because he didn’t just hop away to freedom, I knew he was no simple grasshopper.

I wanted to understand who I was looking at for so long that late October morning in Denver. I had to know! If I could, I would. I knew I should. So I did. And I’ll be darned, he was a katy, a katydid.

A relative of the cricket, and less-so the grasshopper, these primarily nocturnal crawlers resemble their leafy surroundings so closely that during daylight hours they are rarely detected. They get their name from the phonetics of the male mating call, which folks who study insect noises say is: “katy did, katy didn’t.”

I find it ironic and funny that such ambiguous uncertainty, this case of “he said, she said,” or “she did, or said she did, but maybe she didn’t,” is related to mating activity. Do insects fake things to appease or mislead their mates? Or accuse them of such things? Or question their mates’ stories about what and what didn’t happen during you-know-what? Maybe insects aren’t that different than humans.

Regardless of all that, I cannot recall any subject remaining so still during a shoot. For that I paid him extra:  a piece of spinach and a small brussels sprout from the fridge. Much tastier than the plant he rode in on, and perhaps his version of “turning over a new leaf.”

I have to say, my new little alien friend was so well behaved, I moved a step closer to being more comfortable photographing insects. But before you liken me to Prince Valiant, remember: I know there’s always that camera between me and alien. That is my security.

If you are wondering, I refrained from letting him stay in the house all winter. He was escorted out soon after the photo shoot, after signing the model release form. 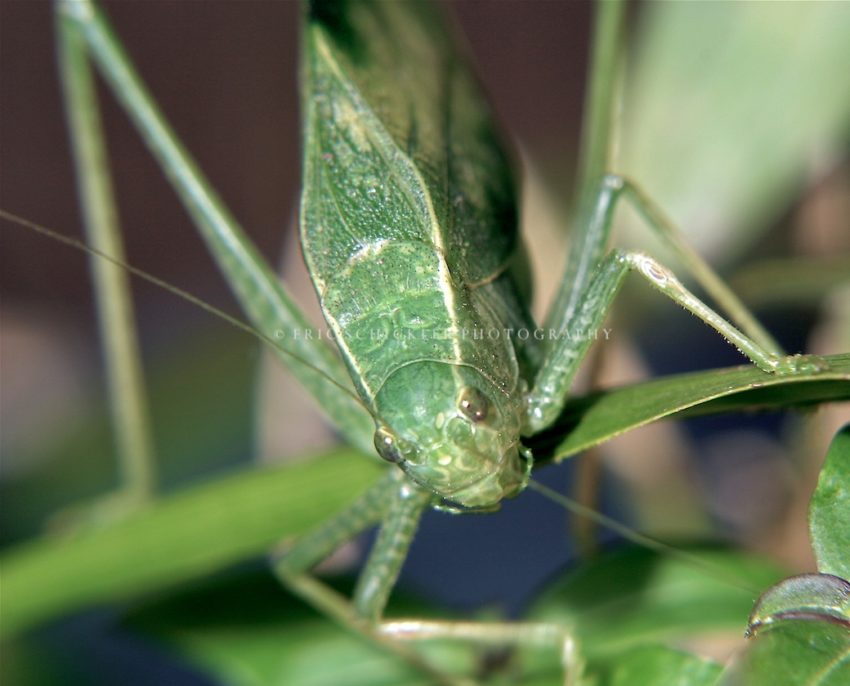 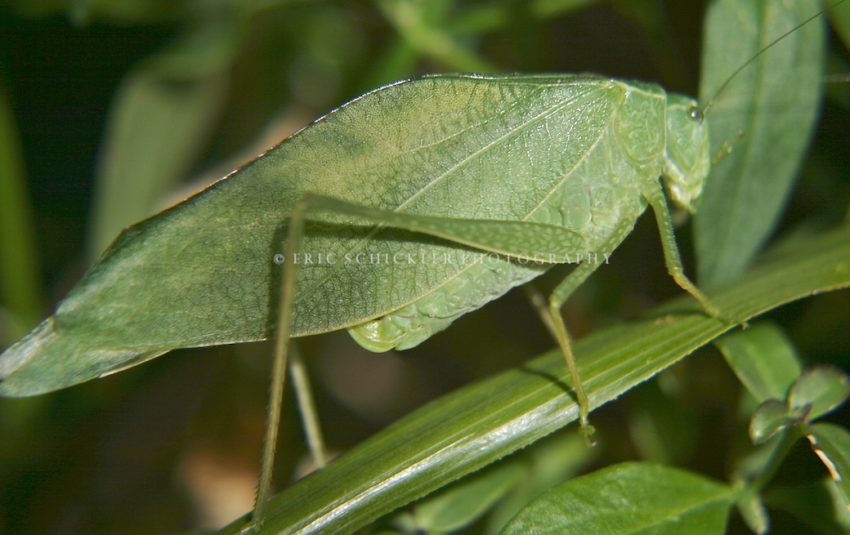 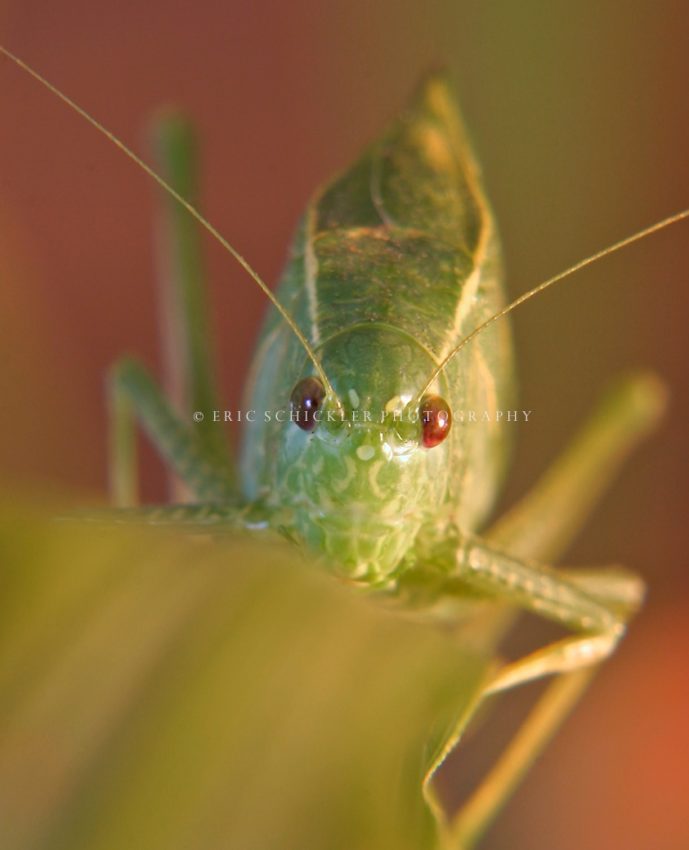 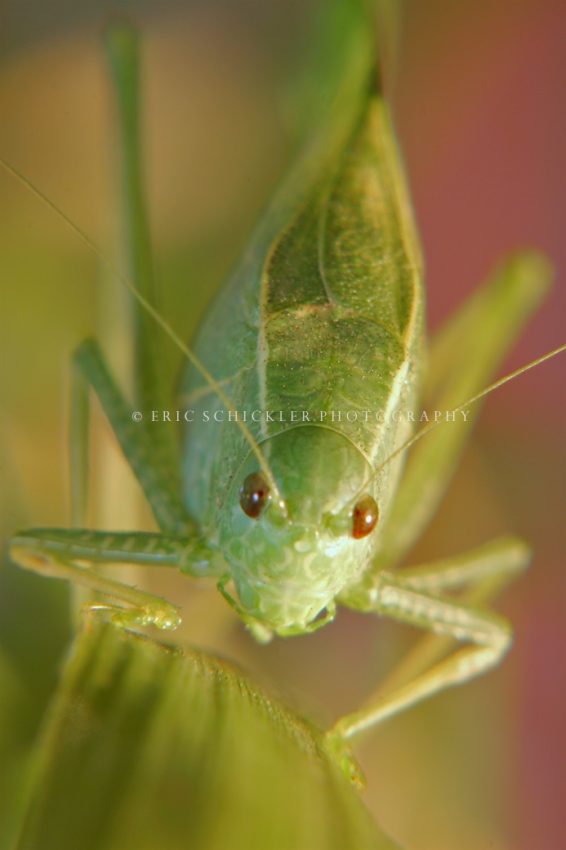 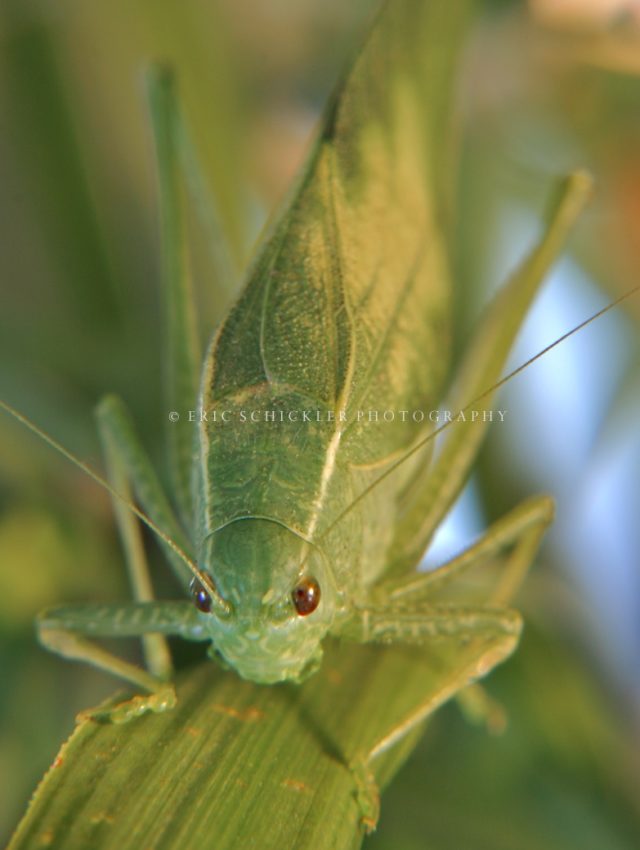 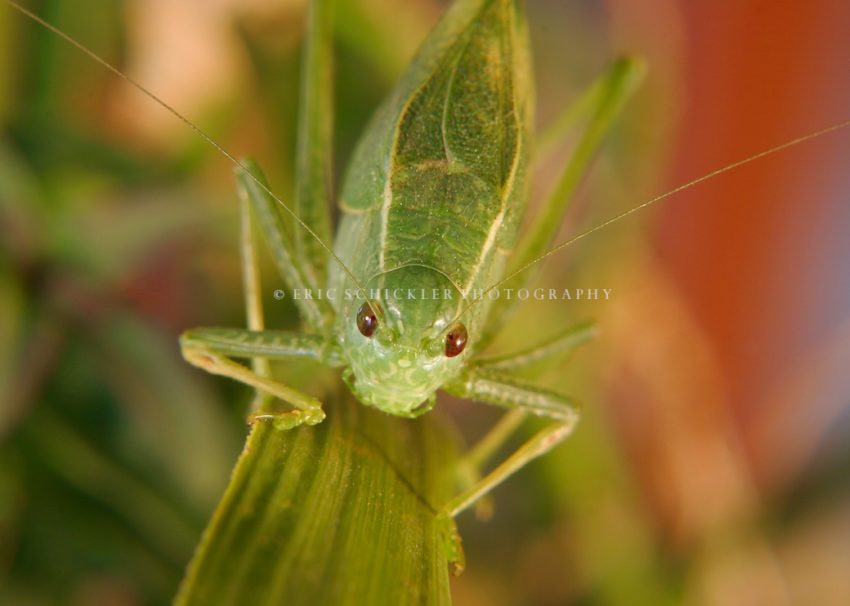 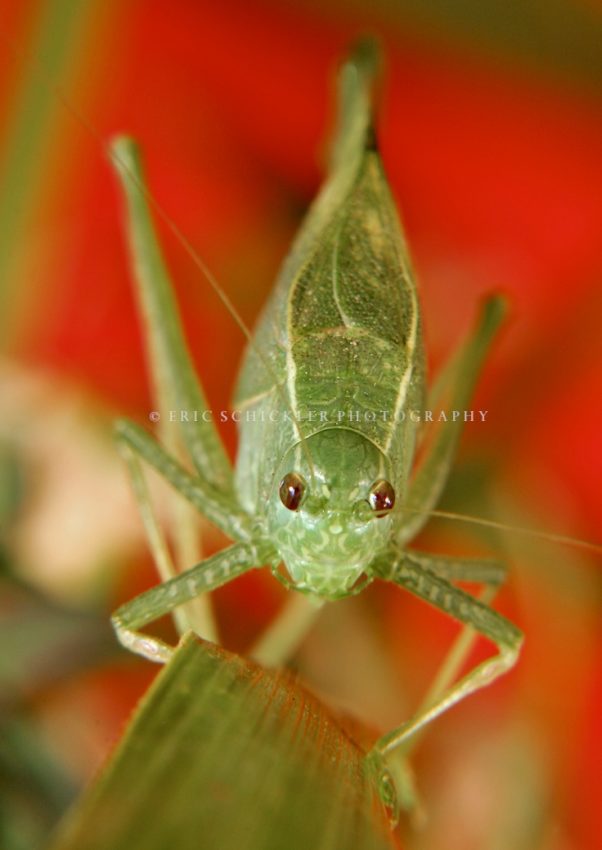 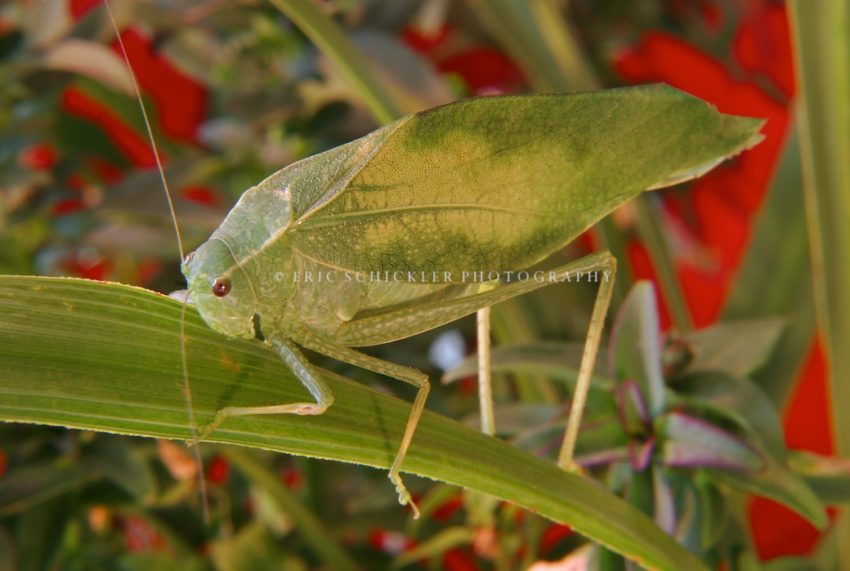 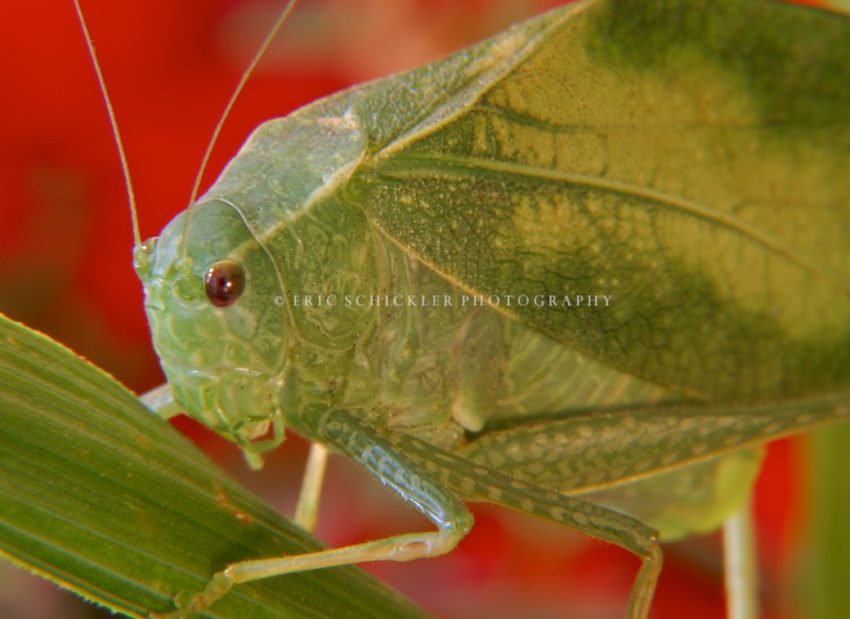 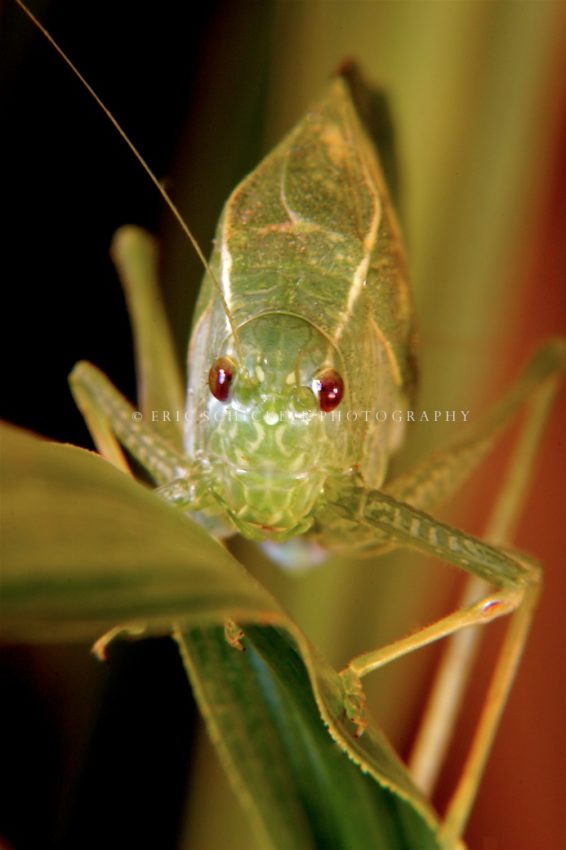 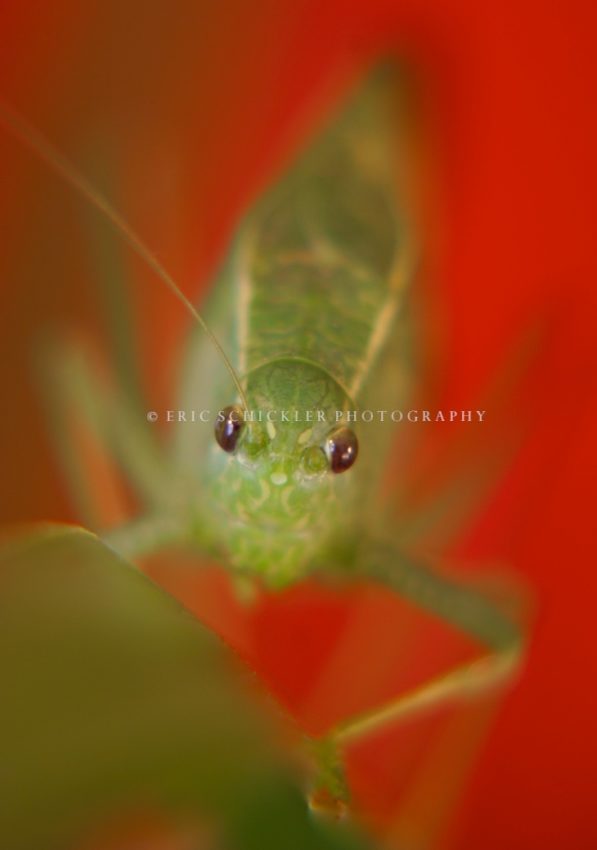 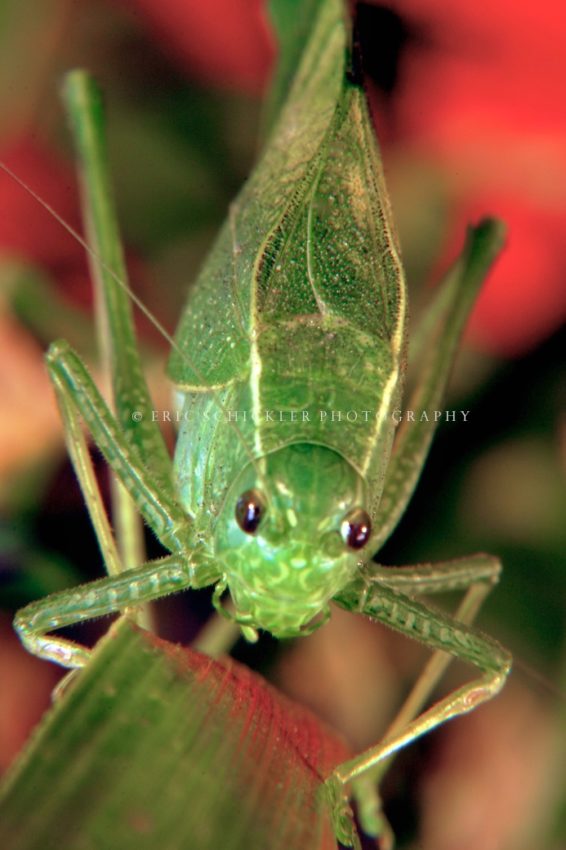